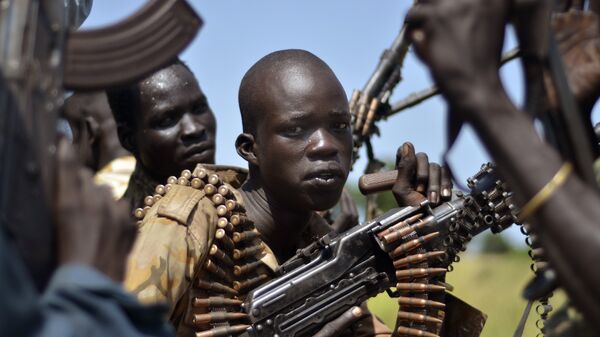 Oxfam Country Director in South Sudan Zlatko Gegic called on the international community to prevent further escalation of tensions in South Sudan and to find a political solution to the ongoing crisis.

US Partially Evacuating Embassy Employees From South Sudan
MOSCOW (Sputnik) — Oxfam Country Director in South Sudan Zlatko Gegic on Monday urged parties to the conflict in the African nation to stop fighting and provide access to the civilians affected by the recent violence escalation.

Renewed fighting broke out last week between the soldiers of the Sudan People's Liberation Army (SPLA) loyal to President Salva Kiir and the SPLA in Opposition, which is supporting First Vice President Riek Machar. According to media reports, over 270 people have been killed.

"This was meant to be the South Sudan's fifth birthday — I cannot think of a more horrendous gift: more fighting, loss of lives, more displacement and less hope… We urge all parties to stop fighting now, respect humanitarian principles and ensure access to those South Sudanese affected by this fighting," Gegic said, as quoted by Oxfam's press service.

Fighting Resumes in South Sudan's Capital
Gegic added that he called on the international community to prevent further escalation of tensions in the country and to find a political solution to the ongoing crisis.

South Sudan broke away from Sudan in 2011 and slid into ethnic-related violence two years later, when Kiir said that a military coup had been planned in the country, pointing the blame at Machar. In August 2015, country's government signed a peace deal with the opposition, but violations are common.