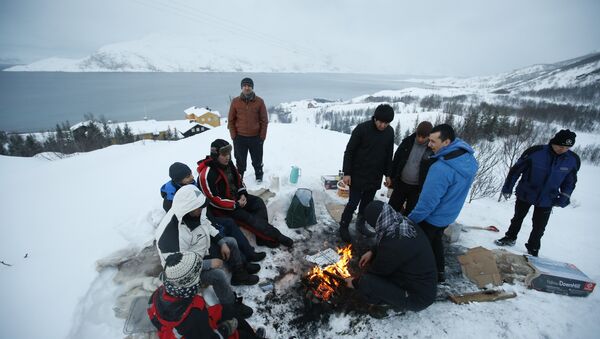 © AP Photo / Alastair Grant
Subscribe
Since the current of refugees to Norway has gradually been drying up, demands to return the money which had been taken from the development budget are being heard.

Get a Job! Nordic Countries Cut Back on Generous Benefits for Migrants
When the refugee figures reached their peak last summer, Norway's Directorate of Immigration (UDI) forecasted another 33,000 asylum-seekers in 2016. Therefore the government swiftly allocated 9.5 billion NOK (roughly 1.12 billion dollars) to deal with the influx. Of this sum, 4.2 billion NOK (roughly 500 million dollars) was derived from the aid budget. Since UDI recently revised its forecast for the year 2016 down to a third, calls to return the money to the aid budget have been made.

"The extra money was to help people who came to Norway. Now that they are no longer coming to Norway, we must help them where they are," Ropstad told to NRK.

Showdown in Copenhagen: Integration Minister Tells Young Thugs to Get a Job
The Christian Democratic Party expects that the ‘spare' money from refugee aid in Norway will be spent on long-term international assistance.
"Siv Jensen [Finance Minister] and Erna Solberg [Prime Minister] will surely use it for many good causes, but we agreed with the government that this was the money that would help people in need," Ropstad said.

Foreign Minister Børge Brende, however, gave no guarantees. If there is money to spare, it might be spent on elderly care in Norway, he told NRK.

"If we happen to use less of the refugee aid than planned, we will discuss where the money should go to. It does not automatically go back to the development budget," Brende said, reminding that Norway is already one of the largest aid donors to poor countries and fragile states.

According to Brende, the time was not yet ripe to draw conclusions as the government has not yet tallied the total bill for the refugees who came in last year, who number over 33,000. So far this year, only 1,678 asylum seekers have been taken in to Norway, which is the lowest figure since 1997. Last year, researcher Erling Holmøy of Statistics Norway (SSB) evaluated the realistic long-term cost of Norway's immigration policy as 750 billion NOK (almost 90 billion USD), Verdens Gang reported.

Refugees Choose Copenhagen Over Cash Offers to Depart Denmark
Last year, former Conservative labor minister Victor D. Norman stated that Norway had enough space and means to accommodate 100,000 Syrian refugees, which would be beneficial in the long run. According to financial expert Trym Riksen, this scenario would set Norwegian state coffers back 62 billion NOK over a three-year period, newspaper Nettavisen reported. In this case, slashing refugee aid would be a deadly mistake to make.

For years, Norway has, despite having a population of only five million, been among the world's most generous countries in terms of international aid. In 2015, Norway provided over 34 billion NOK (roughly 4 billion USD) to poor countries, which amounted to 1 percent of its Gross National Income. Only Norway, together with Sweden, Luxembourg, Denmark and the United Kingdom meet the UN's goal of providing above 0.7 percent of GNP in international aid.