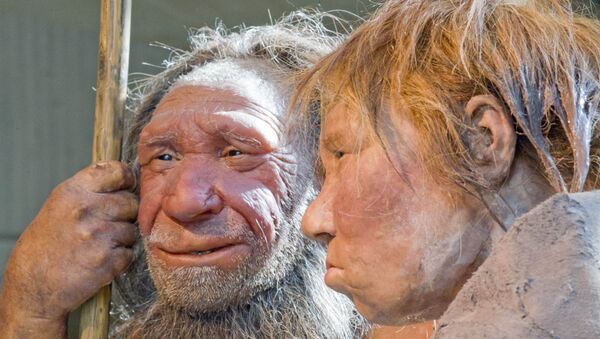 © AP Photo / Martin Meissner
Subscribe
Scientists studying the remains of a Neanderthal population found in a cave in Belgium say they have discovered the first evidence in Northern Europe of cannibalism among the species, which died out around 40,000 years ago.

Jurassic Coop: Scientists Grow Chickens With Legs of a Dinosaur
Scientists studying Neanderthal remains from a cave in Belgium believe they have found the first evidence of Neanderthal cannibalism in Northern Europe.

In the study, published in the journal Scientific Reports, a team of researchers from Europe and the US examined 99 new Neanderthal remains from the Goyet cave site, dated to between 40,500 and 45,500 years ago.

They say that the bones show modifications consistent with cannibalism, and some were even used as to sharpen, or retouch, materials like flint, which Neanderthals used to make tools.

The Neanderthals apparently exploited femurs and tibias the most, and broke them to extract the bone marrow. The cannibalism theory is supported by the fact that horse and reindeer bones at the site were also subjected to the same treatment.

The use of the bones to retouch stone tools was probably a by-product of processing carcasses for food consumption, and the Neanderthals "may have been aware that they were using human remains," because of how fresh the bones were when they were used to sharpen tools, the paleoanthropologists wrote in their paper.

"In addition to being the first site to have yielded multiple Neandertal bones used as retouchers, Goyet not only provides the first unambiguous evidence of Neandertal cannibalism in Northern Europe, but also highlights considerable diversity in mortuary behavior among the region's late Neandertal population in the period immediately preceding their disappearance."

The topic of cannibalism among Neanderthals has been a subject of intense debate since the apparent discovery of cannibalized remains in Southern Europe.

The highly fragmented Neanderthal collection of the third cave at Goyet represents at least five individuals. Dating indicates that the ones marked with an asterisk go back to between 40,500 and 45,500 years ago
© Photo : Asier Gómez-Olivencia et al

Those Neanderthal bones were discovered by paleontologists at the Krapina site in Croatia in 1899. The important discovery consisted of more than 800 pieces of fragmented bone, dated back to around 130,000 years ago.

The researchers who discovered the bones found modifications to them such as cut marks and bone breakage which they argued to be consistent with cannibalism.

Human-Neanderthal Interbreeding Discovered in Europe for First Time
However, since then, the controversial discovery has been contested by other scientists, who said the damage to the bones could have been caused by falling rocks, or carnivorous animals.

More recently, researchers have claimed the discovery of other cannibalized Neanderthal remains in Europe, such as those found at the cave site of Moula-Guercy in France in the 1990s, and the El Sidron cave site in Asturias, Spain.

In 2006, scientists published a study of the bones from El Sidron, which were dated to approximately 43,000 years ago. Their study found that the bones exhibited signs of survival cannibalism among the Neanderthal population, who also showed signs of starvation or malnutrition in childhood.

Neanderthals were once widespread across Europe and Western Asia, starting around 400,000 years ago. By about 40,000 years ago they had largely disappeared, shortly after modern humans began to migrate from Africa to Europe some 45,000 years ago.