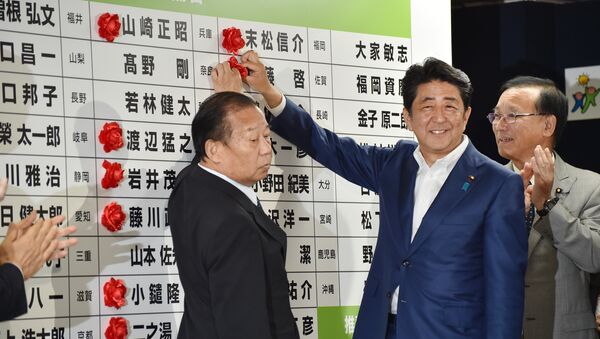 © AFP 2021 / KAZUHIRO NOGI
Subscribe
The ruling coalition of Liberal Democratic (LDP) and Komeito parties has won in Japan’s upper-house election on Sunday, giving Prime Minister Shinzo Abe a “once-in-a-lifetime chance” to alter the pacifist clause of his country’s constitution, turning its defensive army into a fully functioning military for the first time since World War II.

Article 9 of its post-war constitution, drafted under US occupation in 1947, declared that the Japanese people “forever renounce war as a sovereign right of the nation.”

It also pledged that “land, sea, and air forces, as well as other military potential, will never be maintained” by Japan, and that “the right of belligerency will not be recognized.”

As the name of Japan’s military suggests, the Japanese Self-Defense Forces exist only to protect the Japanese homeland. 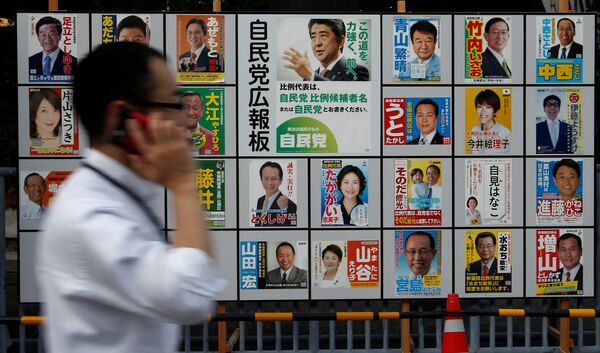 A man walks past Japan's ruling Liberal Democratic Party's (LDP) poster (C) for the July 10 upper house election with the image of Shinzo Abe, Japan's Prime Minister and leader of the LDP, and other candidates' posters at the LDP headquarters in Tokyo, Japan July 10, 2016
© REUTERS / Toru Hanai

In July 2014 the Japanese government approved a reinterpretation of this clause which gave more powers to the Japanese Self-Defense Forces, allowing them to defend other allies in the event of a war being declared upon them. In September 2015, the Japanese National Diet (the country’s bicameral legislature) made the reinterpretation official by enacting a series of laws allowing the Japan Self-Defense Forces to provide material support to allies engaged in combat internationally.

The country’s acting Prime Minister Shinzo Abe has long been advocating the rewriting of Article 9. Abe previously made it clear that he wants to turn Japan’s Self-Defense Forces into a fully-fledged military. The change is also one of the founding principles of the Liberal Democrat Party.

Japan Constitution Reform Likely to Be Approved After Upper House Elections
Any proposed change to the American-written constitution would require a two-thirds majority in both houses of the Diet and a 50% majority in a popular referendum.

Abe’s party and other parties in favor of constitutional reform already hold two-thirds of the seats in the Lower House.

Now that they have secured two thirds in the Upper House, many politicians are rushing to suggest that the move will be no long in coming.

However Alexander Panov, Russian diplomat,Head of the Department of Diplomacy at MGIMO University and former Russian Ambassador to Japan told Sputnik that it is highly unlikely that the constitution will be revised any time soon.

“Abe has a chance to rewrite the constitution, but it is highly unlikely that he will use it, as it will result in the total polarization of the country,” he told Sputnik.

“The majority of the population of the country is against the revision of the constitution, particularly Article 9,” he added.

The diplomat explained that the idea to rewrite the constitution is not new, but the government has to take into account the pacifist mood of the population.

If the Prime Minister decides to get drawn into the process, it might cause not only internal protests but also prompt its neighbors to launch counter-actions: mostly China, with which it already has strained relationship, as well as with South Korea and North Korea. Russia might also react negatively.

China: Japan's Risky Jet Scramble 'Destroyed Peace and Stability in Region'
“I hope that Prime Minister Abe is quite realistic in evaluating the situation and won’t force the revision of the constitution, moreover there is no urgent need for it,” the diplomat said.

His forecast therefore is that the government will continue adding some amendments into its constitution but alter it using reinterpretations rather than by rewriting, similar to the reinterpretation of the status of the Self-Defense Forces.

Alexander Panov also noted that Article 9 did not prevent Japan from creating its Defense Ministry, from arming and modernizing its Self-Defense Forces and from broadening their powers.

“Japan has its Armed Forces. But Japan has no offensive weapons in its possession, such as nuclear submarines, cruisers, aviation carriers, bombers or long-range missiles. However, even if it puts it into service it would hardly contribute to its defense,” the diplomat said.

He further explained that it would only make it more vulnerable due to its territorial location and the density of its population.

Japan, US Agree to Limit Preferential Treatment of US Troops
“These two factors in particular became the key arguments against the development of nuclear weapons on the territory of Japan,” the diplomat explained.

Valery Kistanov, Head of the Center for Japanese Studies at the Institute of Far Eastern Studies of the Russian Academy of Sciences, told Sputnik why the coalition between the Liberal Democratic (LDP) and Komeito party had won in Japan’s upper-house elections.

Much of the public opposes a move to change the constitution, he said. But the lack of a credible opposition party and Prime Minister Shinzo Abe’s downplaying of the issue during his campaign suggests a “disaffected electorate will inadvertently enable the change anyway.”