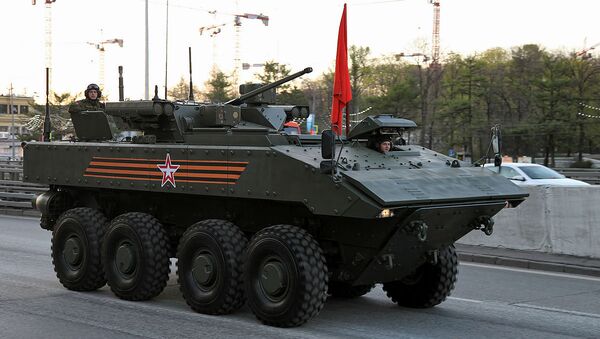 Russian military analyst Vladimir Tuchkov comments on the prospects for Russia's newest armored personnel carrier platform, which has a design that allows it to be configured to serve roles other than just carrying troops.

Last week, Russian media reported that the final stage of amphibious testing on the Bumerang wheeled armored personnel carrier/infantry fighting vehicle platform had begun. It is expected that vehicles in the APC configuration, dubbed the K-16, will begin to enter service in the Russian military by the end of the year. In 2017, the Arzamas Machine-Building Plant is slated to begin mass production of the K-16.

Russian 'Night Hunter' Military Helicopters Help Iraq in Anti-Terror Fight
In a new analysis for Russia's independent online newspaper Svobodnaya Pressa on the Bumerang's capabilities and prospects, Tuchkov recalled that the vehicle, "completely new" in design terms, "differs fundamentally from the machines Russia presently has in its arsenal in this class of weaponry." Russia's aptly named Military-Industrial Company (VPK LLC) was selected to develop the Bumerang platform in 2011, and was given a list of capabilities requirements that was "extremely tough."

"First and foremost," the military analyst recalled, "it was necessary to protect the APC and other military vehicles created on the Boomerang platform from the detonation of mines. In previous comparable APC and (IFV) designs, this had been the vehicle's most vulnerable area….VPK solved this task with flying colors."

Increasingly exacting demands were also made regarding the new vehicle's armor. "Using new materials and optimal geometry research, designers succeeded in making the vehicle impenetrable to small arms and small-caliber munitions, as well as fragments of large caliber shells."

Moreover, the vehicle, which sits on an 8x8 wheeled suspension, is now proving its amphibious capabilities, with its 510-horsepower diesel engine allowing the 15-20 ton unit to nimbly navigate rugged terrain. 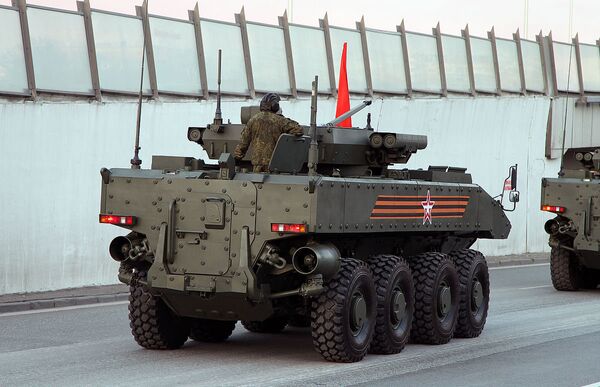 "On the highway," Tuchkov noted, "it is capable of speeds of up to 100 km per hour, with fuel supplies for up to 800 km. Equipped with two waterjet engines, the vehicle is also capable of overcoming water obstacles, and of 'swimming' in rough waves. For this the Bumerang is equipped with intakes and snorkels towering above the water, providing for a sealed engine and internal compartments. In this connection, vehicles using the Bumerang platform can be used by the army, but also by the Navy's amphibious assault units."

Boom! Russian Army's Artillery Competition
First seen in public during the 2015 Moscow Victory Day Parade, much has been written in the Russian defense community regarding the vehicle. Accordingly, Tuchkov pointed out, "experts who have had the opportunity to 'get a feel' for the K-16 suggest that it has reached a level of comfort [for operators] which simply did not exist in previous generations of [Soviet/Russian APCs]. The engine and control module are at the front of the machine, while passengers are loaded up from behind using a ramp. In this way, the men are under the protection of the vehicle's armor." 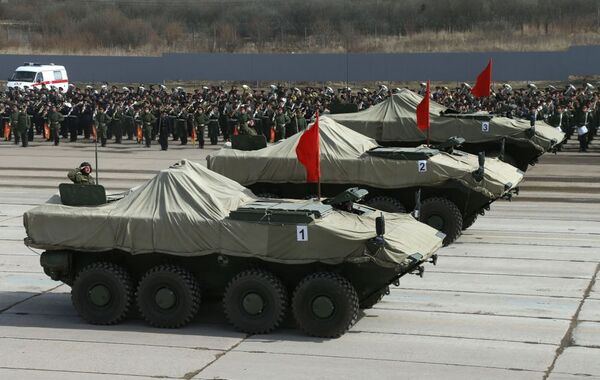 The Bumerang APC, kept literally under wraps until being unveiled to the public for the 2015 Victory Day Parade in Moscow.
© Sputnik / Vadim Savitskii

The Bumerang platform was developed according to an extremely tight schedule. With the Defense Ministry approving the project in November 2011, the first prototypes were delivered in 2013; the vehicles participated in the celebration of the 70th Anniversary of Victory in the Great Patriotic War on May 9, 2015. Since then, they have been undergoing extensive testing, and are being selectively introduced into the army.

In the foreseeable future, the military expert added, the platform is expected to feature a 'full deck' of configurations. Prospective variations include a command vehicle, along with reconnaissance, electronic warfare, self-propelled artillery, armored ambulance and repair vehicles, making the Bumerang something like deadly Legos, configurable according to the military's needs.

Russian Military Industry Set to Become Driver of Civilian Economy
"All this variety demands the use of optimum armaments, given that the platform's 20-ton weight does not allow for the installation of heavy weapons," Tuchkov noted.

Accordingly, the APC variant of the platform is equipped with the 'Bumerang-BM' module, developed by the Tula Instrument Design Bureau. The module includes a 2A42 30 mm auto cannon, along with a coaxial 7.62 mm PTK heavy machine gun, and the Cornet anti-tank system, which features four laser-guided missiles.

"The module is unmanned and fires remotely, either by the vehicle commander or a gunner. This allows for an increased survivability rate for the crew on the one hand, and on the other, for a reduction in the module's size, including a more dense arrangement of the equipment that can be placed within it."

"There are also blocks on the system whose purpose has not yet been disclosed," Tuchkov recalled. "According to experts, they may contain systems of electronic warfare or optronic countermeasures."

"The Bumerang-BM main gun's maximum range is 4,000 meters. Ammunition consists of 500 rounds, including 160 armored piercing tracers and 340 high-explosive rounds. The machine gun box includes 2,000 rounds of ammunition, with a 1,500 meter firing range. The gun barrel is capable of being elevated up to 70 degrees, and of being fired on air targets. Anti-tank missiles, located on the sides of the unit in transport-launch containers, are capable of firing between 8,000-10,000 meters, depending on the modification."

Lebanon Expects Russian Kornet Anti-Tank Missile Delivery Within One Year
According to Tuchkov, there have been indications that the Bumerang-BM module will be installed not only on the Bumerang APC, but also the Kurganets-25 modular IFV, "and even some modifications of the heavy tracked Armata platform. In the meantime, the Tula Instrument Design Bureau is continuing to develop its weapons systems; there are plans to create the BM-'Epocha', a deep modification of the Kurgan-BM, by the end of the decade." 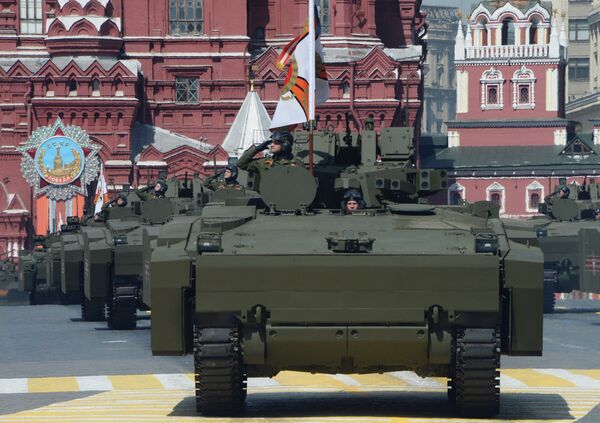 "As far as the K-17 IFV is concerned, in accordance with the objectives of [providing] fire support for infantry, it is necessary to equip it with a powerful combat module like the Bumerang-BM. Open-access information on this process is extremely limited, and sometimes contradictory." In any case, the analyst noted, the K-16's arsenal is likely to include smoke and possibly aerosol grenades.