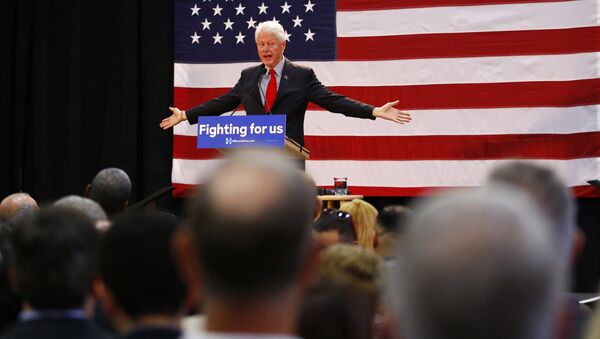 © AP Photo / Julio Cortez
Subscribe
While other presidents are said to have averaged around $60,000 per speech following their departure from the White House, former US President Bill Clinton, in a manner similar to that of his wife Hillary, has turned speaking events into a major money maker.

US Senators Urge Kerry to Suspend Hillary Clinton's Security Clearance
According to May financial disclosures from the Clinton Campaign, Bill earned $2,690,000 for speeches to corporations and other groups, following the kickoff of his wife’s presidential campaign in April. The couple together were paid $6.725 million in speaking fees in 2015.

An in-depth report by the Los Angeles Times asserts that Bill Clinton requires a private aircraft to fly him to events, even for distances as low as 70 miles, when many other presidents and dignitaries will ordinarily drive.

“Clinton changed the rules of political speech-making for cash. He would push not just corporate hosts but also nonprofits and universities to pay fees well beyond what they were accustomed to. His aides would turn what had been a freewheeling format into tightly scripted events where every question from the audience was screened. He and Hillary Clinton would become so skilled at churning profits out of their lectures that they would net more than $150 million from speaking alone after he left the White House,” Evan Halper reported for the Times.

Bill Clinton’s Economic Policies Increased Gap Between Rich, Poor Americans
The former president has a long list of unusual demands written into his speech contracts, including limo rides and expensive dinners. The Clintons previously asserted that they were “dead broke” when they left the White House in 2001.

Hillary Clinton’s speaking fees have been controversial, as many believe that the large sums of money that she has received from financial corporations such as Goldman Sachs present a conflict of interest. The candidate has consistently refused to release her speech transcripts.

“Clinton was also paid $285,000 to appear at an event in Austin, Tex. hosted by the China-Texas Business Council on March 31. The organization helps pair Chinese investors with American business projects to take advantage of the EB-5 visa program. The federal program grants green cards to foreigners who invest $500,000 in American companies or business projects,” the Daily Caller reported in May, regarding payments Bill has received since Hillary began her campaign.

000000
Popular comments
The biggest pair of con artists
raptorabz
11 July 2016, 23:11 GMT2
000000
Uh, it's money laundering. It's not the speech that's paid for. Any forensic accountant should be able to spot that. Seems like people would know that by now. That's just the "justification" for the income and associated lifestyle. It's the same with the $400 toilet seats and cost overruns etc. in the military.
jas
11 July 2016, 23:12 GMT2
000000
Newsfeed
0
New firstOld first
loader
LIVE
Заголовок открываемого материала
Access to the chat has been blocked for violating the rules . You will be able to participate again through:∞. If you do not agree with the blocking, please use the feedback form
The discussion is closed. You can participate in the discussion within 24 hours after the publication of the article.
To participate in the discussion
log in or register
loader
Chats
Заголовок открываемого материала
Worldwide
InternationalEnglishEnglishMundoEspañolSpanish
Europe
DeutschlandDeutschGermanFranceFrançaisFrenchΕλλάδαΕλληνικάGreekItaliaItalianoItalianČeská republikaČeštinaCzechPolskaPolskiPolishСрбиjаСрпскиSerbianLatvijaLatviešuLatvianLietuvaLietuviųLithuanianMoldovaMoldoveneascăMoldavianБеларусьБеларускiBelarusian
Transcaucasia
ԱրմենիաՀայերենArmenianАҧсныАҧсышәалаAbkhazХуссар ИрыстонИронауОssetianსაქართველოქართულიGeorgianAzərbaycanАzərbaycancaAzerbaijani
Middle East
Sputnik عربيArabicArabicTürkiyeTürkçeTurkishSputnik ایرانPersianPersianSputnik افغانستانDariDari
Central Asia
ҚазақстанҚазақ тіліKazakhКыргызстанКыргызчаKyrgyzOʻzbekistonЎзбекчаUzbekТоҷикистонТоҷикӣTajik
East & Southeast Asia
Việt NamTiếng ViệtVietnamese日本日本語Japanese中国中文Chinese
South America
BrasilPortuguêsPortuguese
NewsfeedBreaking
12:02 GMTOxford High Shooting Suspect & His Parents Had Meeting With School Admin Hours Before Attack - Media
12:02 GMTOne Step Closer to Treatment? Scientists Discover Potential Cause of Alzheimer's Disease
12:01 GMTDisney Picks Woman as Chairperson of Board for First Time
11:28 GMTLavrov: US Medium-Range Missiles May Soon Be Deployed in Europe
11:16 GMTMLB Enters Its First Lockout in 26 Years Amid Spat Between Owners and Players
10:52 GMTFormer Austrian Chancellor Kurz Announces He's Leaving Politics
10:40 GMTGT Investigates: US War-Mongering Under Guise of ‘Democracy’ Inflicts Untold Damage on The World
10:34 GMTNASA Astronauts Perform Spacewalk Outside ISS
10:13 GMTMo Salah Laughs Off Ballon d'Or Snub as Liverpool Star Powers the Reds to Dominant Win Over Everton
10:12 GMTLeopard Breaks Into Classroom, Attacks 10-Year-Old Student in India’s Uttar Pradesh - Video
10:08 GMTThe Mail on Sunday Loses Appeal in Breached Privacy Case Filed by Meghan Markle
09:59 GMTChinese Tennis Player Peng in Good Condition, Safe - IOC
09:51 GMTBoris Johnson Slams Facebook Saying ‘Too Many Gangs Using Social Media’ to ‘Fuel' Migrant Crisis
09:44 GMTOSCE 'Unable to Fix Political and Diplomatic Mess' in Balkans, Former USSR, Says Military Observer
09:35 GMTEuropean Leaders Pay Tribute to Late French Ex-President Valery Giscard d'Estaing
09:06 GMTIsrael Has Exerted Efforts to Fight Air Pollution, But Has It Done Enough?
08:57 GMTEx-Austrian Chancellor Kurz Expected to Give Statement Amid Reports of His Withdrawal From Politics
08:51 GMTJapan's Nissan Announces Creation of Lunar Rover Prototype
08:34 GMTLive Updates: COVID Omicron Variant Found in Paris Region on Person Who Returned From Nigeria
08:07 GMTChurch of Sweden Under Fire For Calls to Investigate Israel for 'Apartheid'