Sell Out: Bernie to Endorse Hillary Who Turned Free College into $9/hr Job 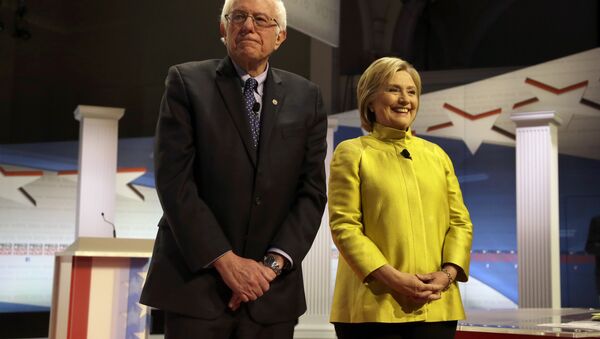 If you read the fine print on Hillary Clinton’s "free college" proposal you’ll realize it looks eerily similar to an underpaid job for students and a big payout to millionaires and billionaires.

On Tuesday, 74-year-old Socialist titan Bernie Sanders, a man who displayed a vibrant energy and enthusiasm that caught fire with young people across America in his noble fight against the establishment, will formally endorse Hillary Clinton who is perhaps the most corrupt politician in US history with more skeletons hiding in her closet than the crypt keeper.

As the old adage goes, nothing in this world is free. That’s a lesson that American college students who are switching their wagons from once “feeling the Bern” to being “with Her” will soon learn assuming the country’s progressive voters are foolhardy enough to put their faith in the least trusted political figure in US history according to recent poll data.

Although many millennials scoffed at Hillary’s announcement that she had conjured up a free college plan as simply “stealing the Bern” – appropriating her opponents policy position and pretending that the idea was her own – after reading the details it is all too obvious that this plan has Clinton written all over  it.

For one, the proposal is designed to fail offering free tuition to students whose families earn less than $80,000 per year in the first year while edging up to $125,000 by the fifth year. That sounds wondrously sensible, but it begs the question what happens to the kid whose parents make $80,001? Or do parents instead decide to forego work if they have children in college so as to fit under the threshold.

This impediment, while seeming miniscule, is a skill used by crafty lobbyists who want to say that their client is for one thing even though they don’t have any intention of moving forward with the legislation.

But, even if Hillary Clinton’s ill-fated "free college" plan were to succeed it has a number of other measures that leaves one to wonder just how generous this proposal is. For one, it has a work requirement attached to it meaning that students will have to commit to work at least 10 hours per week and by the time the proposal runs through the congressional meat grinder you can be certain it will be 20 hours per week.

What does that mean in dollar and sense terms?

The average public university in the United States has an annual tuition rate of $9,410 per year according to statistics compiled by the nonprofit College Board. However, the most expensive public colleges and universities on the list – think Berkeley, UCLA, Michigan – cost about four times that amount brimming with students who don’t meet the economic threshold.

But, of course, the Republican controlled Congress will be concerned that these kids are getting a free lunch. Insert the deal through the meat grinder and at 20 hours per week the average student would be better off just working for $9 per hour – or a below minimum wage $5 per hour if they attend college in Wyoming.

The plan also calls for an addition $350 billion to colleges and universities across the country with no strings attached requiring the funds to go towards student scholarship while students allow them to cut costs by performing vital college services currently done by employees that make much more than $9/hr. It is, in fact, a free money giveaway to millionaire ‘public’ college and university presidents to pad their already lavish six and seven figure salaries.

One other beneficiary exists – a person who bucked the Democratic establishment to earn nearly 46% of the vote in a Herculean effort that earned the love and respect of millions but the disdain of the Beltway elite. That person is Bernie Sanders.

Hillary Clinton’s free college in name only plan allows Bernie Sanders to save face politically by saying that he advocated for the best deal that he could get for the working people of America when knowing in his heart of hearts – assuming he can perform simple arithmetic – that Hillary is offering students stuck in a $1.4 trillion debt trap a $9 per hour job while paying lip service to raising the minimum wage to $15.

This is one of those #SelltheBern moments because it is fair to say one of the most admired people ever in politics has just sold us all out.