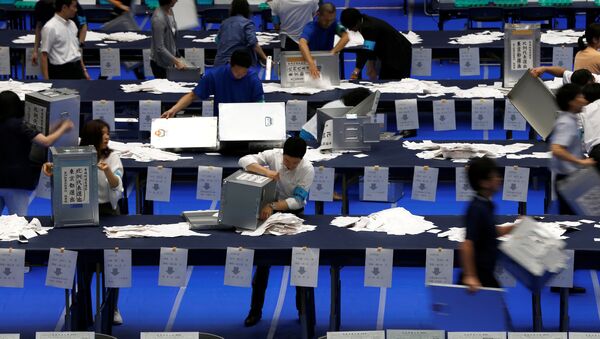 The ruling coalition of Liberal Democratic (LDP) and Komeito parties is set to win the ongoing elections to the parliament's upper house with between 67 and 76 seats, Japanese public broadcaster projected, citing exit polls of voters.

The elections to the House of Councilors kicked off at 7 a.m. local time on Sunday (22:00 GMT) at 48,000 polling stations. Two hours before the end of the voting the turnout was 32.49 percent, NHK reported.

The preliminary polls showed that the LDP-led coalition could gain the so-called super-majority, in which for the first time a single party has a majority in both houses of Japan’s parliament since 1989.

The 242 elected members of the House of Councilors serve six-year terms, with elections every three years for half of the seats.

Sunday’s election is the first vote, in which people aged 18 and 19 years are allowed to vote, with the minimum voting age in Japan previously set at 20.