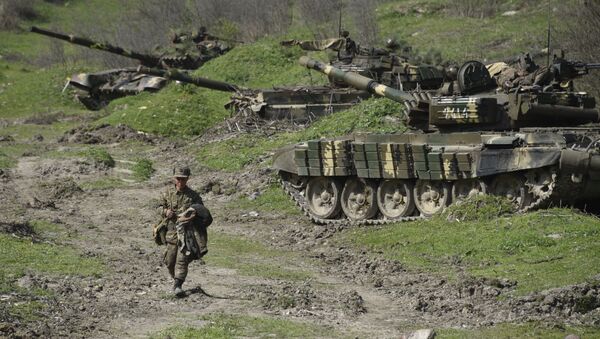 Armenian President Serzh Sargsyan and US Secretary of State John Kerry discussed Friday settlement of the Nagorno-Karabakh conflict during a meeting on the sidelines of NATO summit in Warsaw, the president's press service said.

YEREVAN (Sputnik) — On July 8, Sargsyan arrived in Warsaw to participate at the meeting of the Heads of State and Government of the NATO member and non-member states related to the Resolute Support mission in Afghanistan.

"Sargsyan and Kerry discussed Nagorno-Karabakh settlement’s issues. The Armenian president highly appreciated permanent US efforts, as a co-chair of the OSCE Minsk Group, on securing peace and stability in the region," the press service’s statement said.

The Armenian president once again thanked Kerry for the US steps, aimed at overcoming consequences of the "Azerbaijan’s April aggression against Karabakh."

Both sides also pointed out importance of full implementation of the agreements reached in Vienna and St. Petersburg.

Obama Praises Russia’s Mediation Efforts in Nagorno-Karabakh - Kremlin
Violence erupted in Nagorno-Karabakh on April 2, and led to multiple casualties. The parties to the conflict signed a Russian-brokered ceasefire on April 5, but mutual accusations have not stopped so far.

On May 16, Sargsyan and his Azerbaijani counterpart Ilham Aliyev met in Vienna to discuss the conflict. The sides reiterated there could be no military solution to the conflict and reaffirmed their commitment to 1994 and 1995 peace agreements. The presidents also agreed to finalize the Organization for Security and Co-operation in Europe (OSCE) investigative mechanism as soon as possible to reduce the risk of further violence.