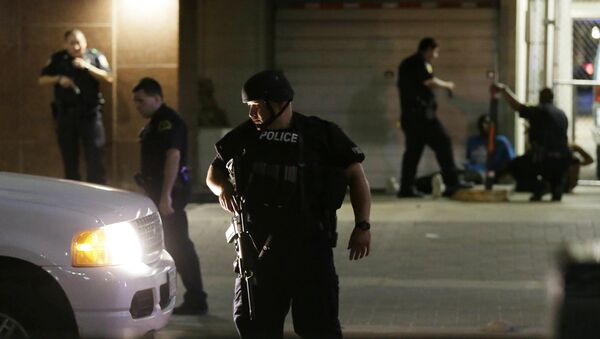 © AP Photo / LM Otero
Subscribe
A horrific wave of violence erupted during a peaceful protest in Dallas, which in its aftermath has left 5 officers dead and eleven others injured in America's worst police assault in recent memory. Additionally, one civilian was hit by a stray bullet.

UPDATE: The fourth suspected shooter has been 'neutralized,' according to local media sources, with some claiming he shot himself, others saying he was taken down.

​Earlier, Dallas police chief confirmed that one of the suspected snipers is hiding in the El Centro College garage. The police were engaged in negotiations with him, however the suspect was not cooperating. The chief also stated that the suspect claimed that bombs had been placed all over the garage and downtown.

There may still be students and teachers in El Centro College at this time.

​The police say that there are at least four suspects, all of whom had rifles and were shooters from different points shooting in triangle arrangement to expand the kill box. The attackers were said to all be coordinated, they purportedly knew the parade route and strategy.

Protests against the killing of two unarmed black men by police forces in Minnesota and Louisiana turned tragic on Thursday night when several snipers shot 15 police officers — 4 DART (Dallas Area Regional Transit) police and 11 Dallas police officers — from an elevated position. At least five officers have been killed and several remain seriously injured per reports by the Dallas Police Association.

It has been a devastating night. We are sad to report a fifth officer has died.

​Dallas police initially reported that they have one suspect cornered while the second sniper remained unaccounted for.

​​Throughout the country there have been other outbreaks of unrest or violence during nationwide protests but nothing on the scale of the tragedy that now grips the city of Dallas, Texas.

The situation that has struck the city of Dallas was once completely out of control with police stuck in panic mode at this point. Initial reports indicate that police have arrested one individual wearing body armor who was brandishing a weapon, but it appears this individual is not connected to the two snipers who have rained terror upon the city.

American TV channels are broadcasting live reports of unrest from different cities of the country.

​In Washington, according to participants, about a thousand people gathered to protest. According to the reports, the protesters broke through the fence around the building of the US Congress.

​Fox News Channel shows unrest and reports shooting in Dallas (Texas). According to the information from DART, four policeman is dead, others got injuries.

One of the shooters was "neutralized" and the second was on the 7th floor of parking garage in the Bank of America building with AR-15 and body armor, some of the earlier reports said.

This is a little bit cleaner clip. Shots fired at the #blacklivesmatter protest. pic.twitter.com/DAJVkCll32

​At the same time Fox News shows a protest in New York City, relatively calm before.

marched in the #StopPoliceTerror #BlackLivesMatter protest in New York. pic.twitter.com/8C6fIsit7w

Black Man Shot to Death by Police During Traffic Stop in Minnesota
The protest in Dallas came after two African-American men were shot and killed by police in separate incidents that were widely shared on social media.

Police in the St. Paul, Minnesota suburb of Falcon Heights shot and killed Philando Castile late Wednesday night after pulling over his car for a broken tail light.

000000
Popular comments
i usually don't condone violence, but i completely understand why. Capitalism is survival of the fittest. Cops believe they are at the top of the food chain and can do anything to anyone.

American Socialist
8 July 2016, 06:47 GMT6
000000
It's going to get worse- this is just the beginning I'm afraid. People are at the breaking point of the lawlessness allowed by authorities and politicians- one in particular. This is also what THEY want, in order to establish even more constricting laws and reduce further, the few rights people have left.
wconell
8 July 2016, 07:00 GMT4
000000
Newsfeed
0
New firstOld first
loader
LIVE
Заголовок открываемого материала
Access to the chat has been blocked for violating the rules . You will be able to participate again through:∞. If you do not agree with the blocking, please use the feedback form
The discussion is closed. You can participate in the discussion within 24 hours after the publication of the article.
To participate in the discussion
log in or register
loader
Chats
Заголовок открываемого материала
Worldwide
InternationalEnglishEnglishMundoEspañolSpanish
Europe
DeutschlandDeutschGermanFranceFrançaisFrenchΕλλάδαΕλληνικάGreekItaliaItalianoItalianČeská republikaČeštinaCzechPolskaPolskiPolishСрбиjаСрпскиSerbianLatvijaLatviešuLatvianLietuvaLietuviųLithuanianMoldovaMoldoveneascăMoldavianБеларусьБеларускiBelarusian
Transcaucasia
ԱրմենիաՀայերենArmenianАҧсныАҧсышәалаAbkhazХуссар ИрыстонИронауОssetianსაქართველოქართულიGeorgianAzərbaycanАzərbaycancaAzerbaijani
Middle East
Sputnik عربيArabicArabicTürkiyeTürkçeTurkishSputnik ایرانPersianPersianSputnik افغانستانDariDari
Central Asia
ҚазақстанҚазақ тіліKazakhКыргызстанКыргызчаKyrgyzOʻzbekistonЎзбекчаUzbekТоҷикистонТоҷикӣTajik
East & Southeast Asia
Việt NamTiếng ViệtVietnamese日本日本語Japanese俄罗斯卫星通讯社中文（简体）Chinese (simplified)俄罗斯卫星通讯社中文（繁体）Chinese (traditional)
South America
BrasilPortuguêsPortuguese
NewsfeedBreaking
08:30 GMTDemi Lovato Opens Up About 'Warm and Loving' UFO Interaction
08:27 GMTBudapest Summons Kiev's Ambassador to Discuss Reaction to Gas Deal With Russia, Reports Say
07:58 GMTYouTube Bans False Content Casting Doubt Over Elections in US, Germany
07:56 GMTPolice Chief in Utah Takes Leave of Absence Amid Gabby Petito 911 Call Handling Probe
07:48 GMT'Impossible': Baghdad Politician Explains Why Iraq and Israel Are Nowhere Close to Normalising Ties
07:46 GMTR. Kelly's Negative Net Worth Grabs Attention on Twitter: 'How He's Gonna Pay the Lawyers?'
07:24 GMTMacron: Greece to Buy Rafale Jets, Three Frigates From France in Deal 'Boosting EU's Independence'
06:54 GMTHikers Find Live Nazi Grenade From World War II Near Swedish Ski Resort
06:48 GMTScania Scandal: Swedish Carmaker Investigated for Bribery Over Deal With Indian Minister
06:37 GMT25 Injured After Explosion in Residential Building in Gothenburg, Sweden, Reports Say
06:13 GMTGerman Chancellor Candidates in Focus as Tough Coalition Talks Loom
05:53 GMTBrexit to Blame: Germany's Olaf Scholz Says 'End to Freedom of Movement' Fueled UK Petrol Crisis
05:37 GMTUK Motorist Runs Over 'Knife-Wielding' Man Amid Alleged Petrol Dispute - Video
05:23 GMTPatriarchy Strikes Back? Iceland's Historic Female-Majority Parliament Up in Smoke After Recount
04:43 GMTUS Marine Colonel Put in Brig For ‘Asking for Accountability’ Over US Departure From Afghanistan
04:03 GMTWitness Who Claims She Saw Prince Andrew Dancing With Giuffre at Club to Testify in Court - Report
03:24 GMTBennett Claims He Said 'No Three Times’ to President Biden During Their August Meeting
03:16 GMTRepublicans Slam DHS Chief Mayorkas for Allowing Thousands of Haitians Into US
01:37 GMTUS ‘Humiliated Like Never Before’, Trump Says, After DHS Allowed Thousands of Migrants to Pour in
01:31 GMTLockheed Martin to Build US Army’s Next Generation Tactical Vehicle Based System