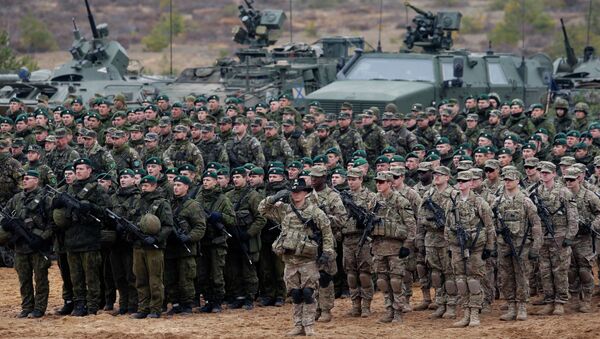 NATO Secretary General Jens Stoltenberg said during the Warsaw summit that the alliance will enhance its rotational presence in Poland, Latvia, Lithuania and Estonia with 4 battalions in 2017.

"We have decided to enhance our military presence in the eastern part of the Alliance with four battalions here in Poland, as well as [in] Estonia, Latvia and Lithuania on a rotational basis," Stoltenberg said.

NATO Seeks 'to Build New Wall Across Europe to Isolate Russia'
He added that the battalions would be "robust and multinational" and would demonstrate the strength of the transatlantic ties.

Canada will deploy soldiers in Latvia, Germany will lead the battalion in Lithuania, the United Kingdom in Estonia, while the United States will serve as a framework nation in Poland, the NATO chief said.

Stoltenberg said that there is no timeline for NATO's expansion in eastern Europe and will last as long as needed.

"Is is an open-ended commitment and it will last as long as necessary. So we haven't any date, where we have said that this will end."

He also said that NATO agreed on multinational troop presence under the Romanian leadership in Romania.

Who is Behind NATO's Anti-Russian Stance
Since 2014, the alliance has been building up its military presence in Europe, especially in Eastern European countries neighboring Russia, using Moscow’s alleged interference in the Ukrainian conflict as a pretext. Moscow has repeatedly denied the claims and warned NATO that the military buildup on Russia’s borders is provocative and threatens the existing strategic balance of power.

Stoltenberg also said that NATO will inform Russia on the decisions it reaches at Warsaw summit during next week's Russia-NATO Council.

He added that NATO aims to conduct a "constuctive" dialogue with Russia instead of isolating it. The NATO chief welcomed Russia's intention to address air saferty in the Baltic region.

"We do not want a new Cold War, we do not want a new arms race and we do not seek new confrontation. As we strengthen our deterrence and defense, we continue to seek constructive dialogue with Russia. Russia is our biggest neighbor… Russia cannot and should not be isolated."

NATO missile defense systems in Spain, Turkey and Romania are now "able to work under NATO command and control," he said.

"Today we have decided to declare initial operational capability of the NATO ballistic missile defense system. This means that the US ships based in Spain, the radar in Turkey and the interceptor site in Romania are now able to work together under NATO command and NATO control."

Aegis Casting Its Shadow: Why US Missile Shield in Romania is 'Insanity'
In May, the United States activated its Aegis ashore ballistic missile defense system (BMDS) in Romania and broke ground on another Aegis ashore site in Poland.

Russia opposes and has repeatedly expressed concern over the creation of the ballistic missile defense system in Europe, which was approved in 2010 during a NATO summit in Lisbon.

"Today we also recognized cyberspace as a new operational domain, joining land, air and sea. This means better protection of our networks and our missions and operations with more focus on cyber training and cyber planning."

According to the secretary general, the allies have pledged to strengthen their own cyber defenses and "share more information and best practices."