NATO Wish to Engage in Dialogue With Russia ‘Play on Words’ 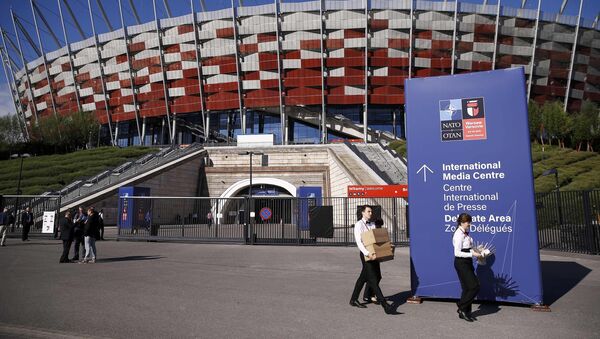 According to an organizer of the counter-NATO summit in Warsaw, the bloc's willingness to engage in a dialogue with Russia is just "a play on words."

NATO 'Produces Crises to Justify Its Own Existence'
WARSAW (Sputnik) — NATO's willingness to engage in a dialogue with Russia is "a play on words," while the alliance’s actions in the vicinity of the Russian borders prove that NATO continues to move in the direction of confrontation, one of the organizers of the counter-NATO summit on July 8-10 in Warsaw told Sputnik on Friday.

"The signs for me are in the direction of a confrontation with Russia with a small step such as assurances that NATO is opened for a dialogue with Russia within the NATO-Russia Council, which is a play with words more than a desire for an open dialogue," Reiner Braun, who is also a co-president of the International Peace Bureau (IPB) disarmament NGO, said.

According to Braun, those assurances can be easily explained by a part of the NATO strategy that assumes a search for a compromise between the political differences of the NATO member-states.

"They have to have both sides: they have the Eastern European state and the Baltic countries that want to have a confrontation with Russia and they have to work with Germany that want to reduce an existing tension due to the profits interests… In reality, NATO is moving toward a policy of deterrence and aggression against Russia because the march of NATO to the East has not stopped that is for me the key issues," Braun said.

According to Braun, the West has to engage in cooperation with Russia instead, focusing on social, economic and cultural fields, going back to a policy of disarmament.

The counter-NATO Summit is taking place in Warsaw at the same time as the official NATO Summit.