US Stands Shoulder to Shoulder With European Union After Brexit 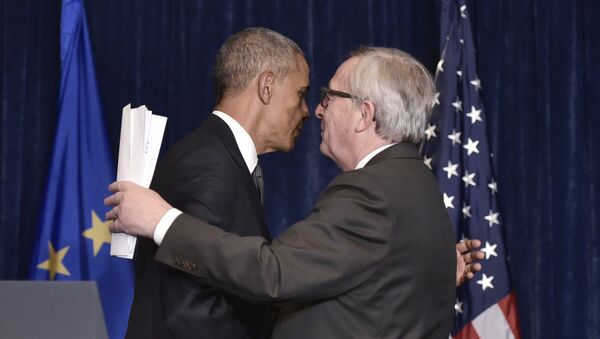 The show of US-EU unity was symbolic, coming just two weeks after the UK referendum on its EU membership, which delivered Brexit, leaving Britain about to divorce its continental neighbors, with some commentators saying its role within NATO being diminished.

"Everybody is aware it's a critical moment for the European Union. The vote in the UK to leave the EU has created uncertainty about the future of European integration. Unfortunately, this has led some to suggest that the entire edifice of European security and prosperity is crumbling.

"There are those who are questioning what does this mean from the transatlantic relationship. This kind of hyperbole is misplaced. I want to take the opportunity to reaffirm some basic points that bear repeating."

​"First, based on my recent discussions with [UK] Prime Minister Cameron and [German] Chancellor Merkel, I am absolutely confident that the UK and the European Union will work together in a pragmatic and cooperative fashion to ensure that the UK's transition is orderly and smooth. No-one has an interest in protracted adversarial negotiations," Obama said.

However, he threw his weight behind the EU and its plans for further integration, which includes concluding the controversial Transatlantic Trade and Investment Partnership (TTIP), which will create the biggest trade deal in the world between the US and the EU. Obama has been pushing for it to be finalized before he leaves office, although there is growing opposition to it in Europe.

"Second, even as we face the difficulties of this moment, we cannot lose sight of the extraordinary achievement that European integration continues to be. More than 500 million people speaking 24 different official languages in more than two dozen countries — 19 with a common currency. Every member of the EU is a democracy. No EU country has ever raised arms against another."

​In a clear sign that he was unhappy with Brexit, he said: "An integrated Europe is one of the greatest political and economic achievement of modern times. And this is an achievement that has to be preserved. Third, the United States has a strong and enduring interest in a united Europe. We're bound together by ties of history, family and our common values.

"For nearly 70 years, the United States has been a strong champion of European integration and we will remain so," he said.

​Tusk made an emphatic statement that Brexit would not be allowed to damage the EU.

Tusk Urges EU to Increase its Value as a 'NATO Friend'
"The geopolitical consequences of Brexit are very serious. Maintaining the closest possible relationship in the EU and the UK is in European and American interests. But it is equally important to send today a strong message to the whole world that Brexit — as sad and meaningful as it is — is just an incident and not the beginning of a process.

"To all our opponents, on the inside and out, who are hoping for a sequel to Brexit, I want to say loud and clear, you won't see on the screen the words 'to be continued,' " Tusk said.

Juncker further gave a clear message of the strong US-EU bonds, saying: "The United States, NATO and the European Union are central pillars of the global order. We complement each other and together provide peace and stability in Europe."

000000
Popular comments
the three stooges.
michael
9 July 2016, 09:13 GMT
000000
I should think the European Countries are quaking in their boots. Focus shifts from the thorn in the side of Europe on Foreign Policy UK using Financial Extortion - to EU as we predicted. While all European Countries have suffered the fallout from US Foreign Policy in the Mid East, orchestrated by just Blair, Bush, Clinton, Cameron, their people have to sit back and watch this display and hope it does not happen.