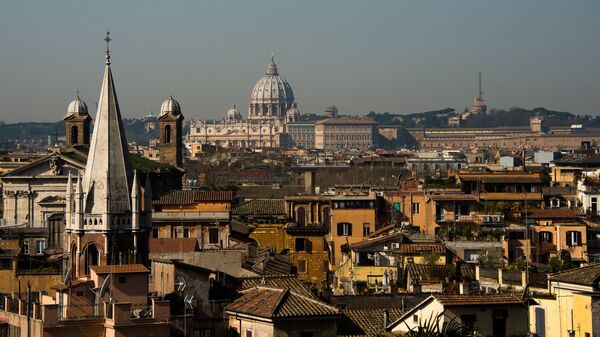 © Sputnik / Alexander Vilf
/
Go to the mediabank
Subscribe
International
India
Africa
While all eyes have turned to Brexit a major political and economic crisis is mounting in another European nation, Italy, an article in Business Insider read.

"Italy is on the cusp of tearing Europe apart but the economic and political crisis brewing in the nation is largely going unnoticed," the article read.

According to the author, a quick look at the country’s economic data, banking crisis and the upcoming constitutional referendum is enough to understand that "Italy is like a bomb waiting to explode."

"Italy is Europe’s fourth-biggest economy and one of its weakest. Public debt stands at 135% of GDP; the adult employment rate is lower than in any EU country bar Greece. The economy has been moribund for years, suffocated by over-regulation and feeble productivity," according to The Economist.

Union Jacked: Brexit Makes Europe a 'Mockery of the World Economy'
Since Britain voted to leave the European Union concerns about both the Italian economy and the entire EU financial system have multiplied. Financial analysts warn that the turmoil in Italy could spread across Europe in a domino effect, an article on Express.co.uk read.

Moreover, in October, Italy will hold a referendum which would be of equal importance to the Brexit vote.

The results of the referendum would have a serious impact on Italy and the situation across Europe. The Italians will have to decide on a reform to the country’s Senate, the upper house of the parliament. If approved the proposed reform would change the formation of the Senate, accumulating power in the lower house.

The referendum will be "probably the single biggest risk on the European political landscape this year among non-UK issues," Citi analysts noted.

Analysts note that the reform would speed up the lawmaking process in Italy. Currently, both houses of the parliament have similar lawmaking authorities, creating hurdles for approving new laws.

Italy 'Should Return National Currency' to Revive Its Economy
If the reform is approved this could improve political stability in Italy and help Prime Minister Matteo Renzi to push through laws aimed at improving the country’s economic capabilities, the article in Business Insider read.

But if denied there is the possibility that Renzi’s government will fall. This would spark political chaos Italy has not seen since the Silvio Berlusconi’s resignation.

"If the referendum is rejected, we would expect the fall of Renzi’s government. Forming a stable government majority either before or after a new election could become extremely challenging even by Italian standards," Deutsche Bank analysts wrote in a note to clients.

A political crisis can also spark financial and economic turmoil. According to estimates of the General Confederation of Italian Industry, if the reform is rejected, it would push Italy into recession, lead to massive capital flight, and increase Italy’s debt.

According to BI, "Italy simply cannot afford any of those things at the moment" since the country is seeing a massive banking crisis.

"Amid stagnation and deflation, Italy’s banks are in deep trouble, burdened by some €360 billion ($400 billion) of souring loans, the equivalent of a fifth of the country’s GDP," The Economist reported.

"Contagion was the problem that really was large in 2007 and beyond, and I think that will be something of a concern. And if there were to be a systemic failure in Italy on a major scale then there would be that risk of contagion spilling out through the other European banks," Jeremy Stretch, Head of FX Stategy at CIBC told Euronews.

The problems of the Italian banking system could spark recession in the country which would immediately hit the entire European Union like it was at the heights of the Greek debt crisis.

Worse to Worse: ECB Preparing for Brexit Scenario as Banks Crumble
"One theme which could dictate near term direction for markets and which arguably Brexit has reignited and brought back to the forefront is the ailing and fragile state of the Italian banking sector," Deutsche Bank's Jim Reid wrote.

The burden of bad loans in Italy is so enormous that the government in April established a fund to support its weakest banks and forced bank executives and investors to put €5 billion ($5.57 billion) into it.

For instance, Monte Paschi, the world’s oldest and Italy’s weakest bank, has bad loans of €47 billion, a headache for the European Central Bank.

"The Italian financial system is teetering on a precipice without much hope of a solution. Brexit may be the biggest problem facing Europe right now, but Italy isn't far behind," Business Insider concluded.