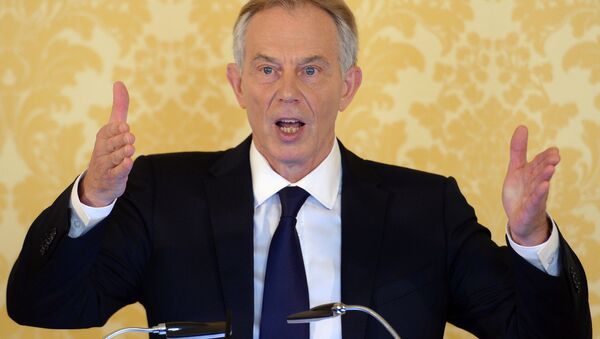 Radio Sputnik’s Loud & Clear spoke with journalists Salman Shaheen and Alexander Mercouris about the revelations of the Chilcot report what, precisely, is their value.

The executive summary of the report stated, "We have concluded that the UK chose to join the invasion of Iraq before the peaceful options for disarmament had been exhausted. Military action at that time was not a last resort."

​Shaheen commented that the report’s conclusion amounts to being told that the sky is blue. Mercouris said that the report’s findings were "blindingly obvious," and that protesters and government officials alike disagreed, sometimes violently, with the 2003 decision to go to war.

"It wasn’t just the millions of people protesting in London and all over the world," Mercouris explained, "it was also many foreign governments who were not supporting the UN resolution that the United States and Britain were seeking to attack Iraq, many made it clear that they absolutely opposed it. This included friends of the United States, like Germany and France. So it seems extraordinary that this should be seen as any sort of revelation."

Loud & Clear host Brian Becker asked, "So what’s the point of the Chilcot Report? The war in Iraq was a war of choice," while pointing out that "Saddam Hussein and the Iraqi government did not pose any kind of threat to the United States or Britain. Iraq was technically at peace with the United States and the UK, the March 19th shock and awe bombing was breaking the peace. It was, by all international law definitions, a war of aggression."

Shaheen responded by saying that the British government’s belated understanding of the Iraq War’s implications stems from its unwillingness to listen to popular opinion and common sense.

"I don’t think governments tend to listen to protesters, no matter how many of them there are" he reasoned. "But the benefit of history being on our side is not really enough, if there’s ever going to be any lessons learned from the Iraq War, these reports have to inform future foreign policy decisions."

Becker noted that the report can’t speak to the legality of Blair’s decision to get involved in Iraq, and asked whether former Prime Ministers could be held accountable for their actions.

"I doubt he’ll be held accountable in any legal sense." said Mercouris, "[Chilcot] has said that he is not conducting a legal investigation, it is not for him and the inquiry team to come to that kind conclusion. When he says that the war was not a last resort, he’s essentially saying it was an act of aggression, and that kind of aggression is a war crime."

Mercouris added that the current political climate in Britain isn’t conducive to impeachment.

"If you look at people who are sitting in the House Of Commons at the moment, I don’t get the sense that many of them want to go down that road. The present Prime Minister, [David] Cameron, is an admirer of Tony Blair. Most of the Labour Party are former supporters of Tony Blair and there is great support for Blair across the conservative benches."

Shaheen said that Blair’s premeditated promises to Bush indicate that the war was planned well in advance, and the stated justifications were false flags designed to cover the real motives.

"The Iraq war was planned a long time in advance and it was never really contingent upon any evidence of weapons of mass destruction,” he said. “If there were any attempts to find any weapons of mass destruction, I believe evidence would have been used to fit the decision [that had already been made.] Blair mislead Parliament to bring us into war, and he’d already made assurances to George Bush."