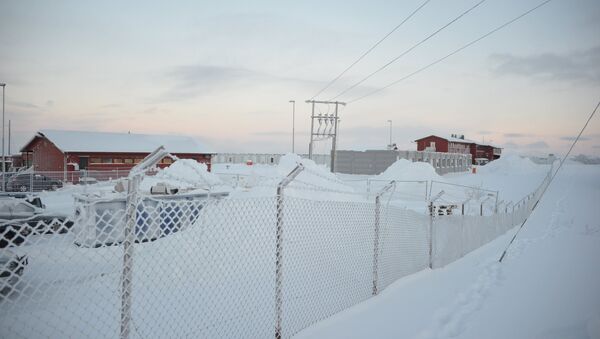 © Sputnik / Dmitry Vinogradov
/
Go to the photo bank
Subscribe
Following a big drop in the number of asylum seekers, Norway is closing down one of its largest accommodation centers in Finnmark, near the Russian border. The center was established last year, but has now become useless for lack of demand.

Immigrants to Secure Norway's Population Growth as Rural Areas Become Empty
Last year hundreds of asylum-seekers poured into Norway through the so-called "Arctic route" via Russia, using the border station Storskog as an entry point. The sheer numbers spurred the Norwegian authorities to establish a large arrival center for 600 places in the border town of Kirkenes. Today, the situation has become unrecognizable compared to last year's chaos.

"We terminate the operating agreement with the Arrival Center Finnmark. The reason for the dismissal is that we have not had any arrivals from Russia since November last year," Christine Wilberg of the Norwegian Migration Board UDI told the Norwegian newspaper Verdens Gang.

The last 48 asylum-seekers left the camp earlier this week. The contract with operator company Hero Norge, however, runs until November, with some 60 employees working in an empty center. Despite the termination of the operating agreement, possibilities will be left for the center to be used if needed in case of contingency. Hero Norge is today Scandinavia's largest reception operator and has dozens reception in Norway and Sweden. Last year, the company had a record turnover of 852 million kroner (101 million USD), Norwegian newspaper Dagbladet reported.

Danish Overseas Aid May Send More Refugees to Europe
So far this year, only 1,678 asylum seekers have been taken in to Norway, which is the lowest figure since 1997. As of today, around 12,000 reception places stay empty, a marked drop compared to last year's peak of over 30,000 asylum-seekers.

The average expense per room in an ordinary accommodation center is 110,000 kroner (roughly 13,000 USD) per year, which yields a daily outlay of 301 kroner kroner (36 USD) per refugee, UDI noted, citing possibilities for cheaper solutions.

As a number of the EU member states have decided to close their borders amid the unprecedented influx of asylum-seekers, many switched their attention to polar Russia as a backdoor to the EU. The "Arctic route" via Murmansk was seen a more roundabout, but nonetheless safer way of reaching desired destinations in Norway and Finland than crossing the Mediterranean. Approximately 4,800 refugees availed themselves of the Polar route to Norway last year. The influx winded down following bilateral agreements and decisive measures on Russia's part.