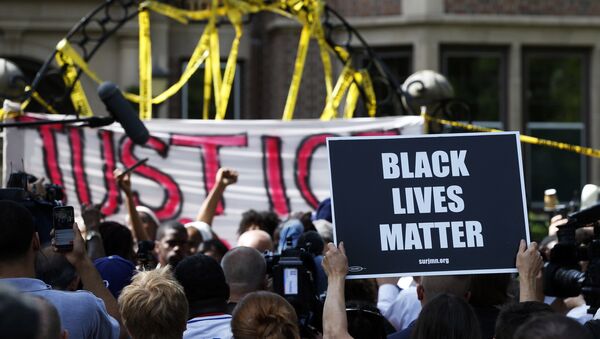 © AP Photo / Jim Mone
Subscribe
International
India
Africa
US lawmakers have a duty to dismantle the structural racial inequalities in the United States that have led to the shooting deaths of Minnesota resident Philando Castile and dozens of other young African-American men by police officers, Senator Al Franken said in a statement on Thursday.

Halfway to 2017: US Police Still Killing People at Alarming Rate
WASHINGTON (Sputnik) — Police in the St. Paul suburb of Falcon Heights shot and killed Castile late Wednesday night after pulling over his car for a broken tail light.

"We need to make sure that justice is pursued swiftly and thoroughly in this case, and we must also recognize that it is our job as lawmakers to help address and dismantle the systemic racial inequalities that lead to far too many of these deaths," the Minnesota lawmaker stated.

Castile’s girlfriend, identified in US media as Lavish Reynolds, uploaded the video of his death on social media after he was shot in front of her and the couple’s infant daughter. Reynolds was later taken into custody by police.

The 32-year-old Castile was the second African-American man whose death at the hands of US police was filmed this week.

The Justice Department said earlier in the day that they are assessing the situation regarding Castile’s death. Minnesota Governor Mark Dayton asked the Department on Thursday to open a federal inquiry into the incident.