US Missile Defense Test Failed Miserably, and the Pentagon Lied About It 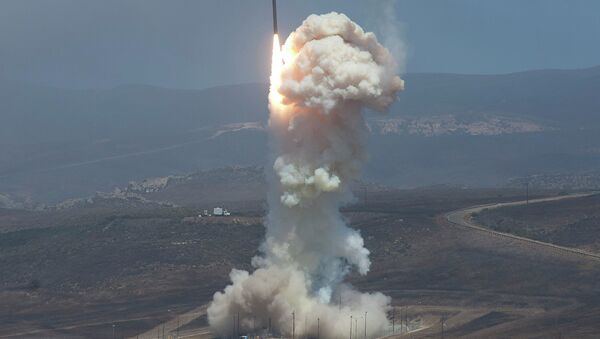 © Flickr / U.S. Missile Defense Agency
Subscribe
After spending billions of dollars, the US government is having trouble getting its state-of-the-art homeland missile defense system to function according to plan, and it’s driven the Pentagon to lie about the program’s success rate.

On January 28, the Pentagon’s Missile Defense Agency conducted the first test flight of new so-called divert thrusters, to be used on anti-missile interceptors. A military statement deemed this a "successful test flight," claiming the thrusters allowed the interceptors to stop a mock warhead.

"On this flight, we validated key design improvements in the divert and attitude control system, demonstrating improved performance, reliability and productibility," said Michael Bright of Aerojet Rocketdyne, maker of the thrusters, in a statement.

"The overall goal of the Missile Defense Agency is to make a more capable and reliable system, and this successful test demonstrated significant progress toward reaching that goal."

According to the Los Angeles Times, however, these claims were falsified. During the test, one of the thrusters failed. This caused the interceptor to lose control and the mock missile to slip through the defense shield.

"The mission wasn’t successful," a project scientist, speaking on condition of anonymity, told the LA Times. "Did the thruster perform as expected? No, it did not provide the control necessary for a lethal impact of an incoming threat."

A second scientist said that claims of success were "hyperbole, unsupported by any test data."

Other engineers indicated that the faulty thrusters caused the interceptor to miss its target by "a distance 20 times greater than what was expected," the LA Times reported.

The program, known as Ground-Based Midcourse Defense (GMD), has cost US taxpayers over $40 billion since 2004. It was designed as a means to prevent a potential nuclear attack, and involves 30 interceptors that can be launched from various terrestrial locations across the United States.

The thrusters have come under scrutiny before. Two unsuccessful tests in 2010 were attributed to the component, and ultimately led to the creation of the latest model. An earlier test of the new thrusters occurred in 2013 and resulted in failure.

According to a report from the US Government Accountability Office, these failures were the result of rushed engineering work and "omitting steps in the design process."

When asked for comment by the LA Times, the Missile Defense Agency acknowledged that problems had occurred during the "successful" test.

"There was an observation unrelated to the new thruster hardware that has been investigated and successfully root-caused," the agency said. "Any necessary corrective actions will be taken for the next flight test."

The agency maintained that “the new thrusters performed as designed” and within "critical performance parameters."

000000
Popular comments
another example of us exceptionalism. :)
michael
7 July 2016, 02:22 GMT4
000000
Let's face it, the US needs a anti-missile system. The industry can provide it... but as long as the US does not have a reliable system, they will have to continue to pay... Therefore the industry is totally not motivated to provide an effective system that works. The purpose of the government is to have a Defense System. The purpose of the industry is to have a max of money when providing that system.