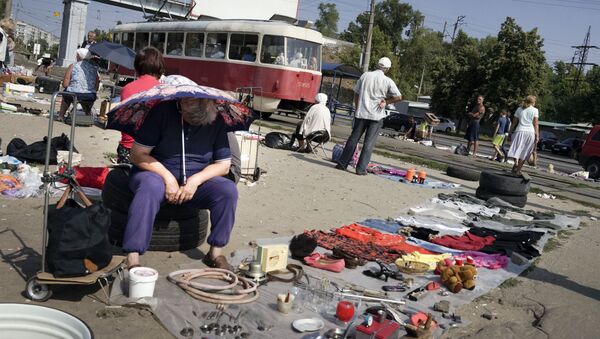 The Ukrainian government is negotiating with the IMF on the third tranche of its promised $17.5 billion credit line, after being given $5 billion in March 2015 and another $1.7 billion in August 2015. However, additional funding has not been forthcoming due to the country's political crisis and lack of progress in reforms. Now, Kiev is hoping to receive an additional $1.7 billion before the year is out, but is going to have to cut social programs even further to do so.

"Ukrainian Prime Minister Vladimir Groisman is in trouble: he needs IMF loans, but the requirements demanded by the organization are tough and unpopular in Kiev," the paper suggested.

Ukraine Urges EU to Make Russia Scrap Restrictions on Transit of its Goods
Recently Ivan Miklos, the former deputy prime minister of Slovakia, presently serving as an adviser to Mr. Grosman, said that progress had been made in the negotiations. The IMF would be prepared to offer the third tranche of credit, but in return would require 'improvements' in pension reform. Average monthly pensions in the country currently amount to the equivalent about $55 US.

This past spring, the government repeatedly insisted that pension reform would not be among the IMF's requirements. Meanwhile, the organization is now demanding a gradual increase in the country's pension age, presently 60 years for men and 55 years for women (the latter is gradually being raised to 60 years).

"For Premier Groisman, the further increase in the pension age is quite a delicate matter," Der Standard noted. Social discontent is expected to increase; even at their present rates, many ordinary Ukrainians find it extremely difficult to survive on their current pensions.

"Groisman is already under severe pressure. His popularity ratings are low, and he stands in the shadow of President Petro Poroshenko," the paper added, citing Kiev-based political analyst Alexander Kawa.

Pointing to reforms resulting in regular increases in utility prices, and the decline in peoples' standard of living over the past two and a half years of reforms, Der Standard warned that the term 'reform' has become a dirty word in the country.

Meanwhile, the pro-EU government in Kiev is also facing growing problems in its relationship with Brussels. Commenting on Kiev's refusal to conduct negotiations to change the text of the EU-Ukraine Association Agreement, political analyst Vasily Stoyakin told Sputnik that Kiev's position was based on the worrying realization that Ukraine no longer poses any interest for the bloc.

Western Countries Lost Over $60Bln in 2014-2015 Over Anti-Russian Sanctions
Late last month, Ukrainian Foreign Minister Pavlo Klimkin insisted that changes to the Association Agreement would not be possible without Kiev's consent. Kiev, in turn, is not ready to make any changes, despite Dutch insistence.

Earlier, Dutch Prime Minister Mark Rutte said that Amsterdam might not ratify the agreement, unless a "solution to the issues brought by the Dutch referendum is found." In April, the Netherlands held a consultative referendum on the Association Agreement, with 61% of voters stepping out against the agreement.

Speaking to Sputnik, Stoyakin, the director of Kiev-based Center for Political Marketing, suggested that Kiev's position is based on the realization that the EU is losing interest in Ukraine. "Two and a half years ago, Europeans fought like lions to ensure that Ukraine signed an Association Agreement with the bloc, promising Kiev mountains of gold. Today, we are witnessing the complete opposite: Europe is pushing away Ukraine with all the strength it can muster, if only to ensure that Ukrainian refugees do not rush to Europe, following the flow of refugees coming from the Middle East."

Ultimately, the analyst lamented, "the situation is quite clear: Europe does not need a country with a ruined economy in a state of undeclared war and with an inadequate political leadership."

Accordingly, Kiev's response is also understandable, Stoyakin suggested. "If serious changes, intended to practically repudiate the already-signed Agreement on Association are made, under the pretext of the Dutch referendum, of course this will make the political elite in Kiev very nervous. They fear a radical scenario where they are simply fobbed off, leaving an Association Agreement which does not give Ukraine any rights."