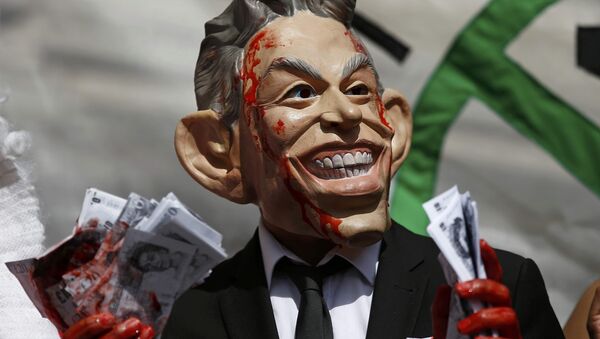 Former UK Prime Minister Tony Blair "lied" to the UK public and parliament about the reasons over participation in a US-led coalition that invaded Iraq in 2003, UK lawmaker Caroline Lucas said in a statement Wednesday.

‘Damning’ Chilcot Report to Raise Questions About Blair’s Decision-Making
MOSCOW (Sputnik) – Earlier in the day, the UK government released an report by Sir John Chilcot devoted to the UK role in the 2003 Iraq War. Blair has been criticized for the United Kingdom’s involvement in the conflict that stretched through 2011. The campaign to topple then Iraqi leader Saddam Hussein on suspicion that he had weapons of mass destruction killed 179 British soldiers and hundreds of thousands of Iraqis, many of them civilians.

"This report confirms the series of serious failures that led to this disastrous war. We know for sure that Government Ministers, including Tony Blair, lied to the public about their reasons for going to war. He said he would support George Bush ‘whatever’ eight months before the war – and thousands of lives were lost because he stuck to that promise despite the evidence in front of him," Lucas said, adding that Blair knew he would never gain parliamentary support "for regime change" in Iraq.

According to Lucas, Blair's claim that it was a war solely to eradicate weapons of mass destruction "is now in tatters" and that is why the ex-prime minister should take responsibility for the consequences of this war.

The United Kingdom was part of a US-led coalition that invaded Iraq in 2003, without a UN mandate, after accusing Saddam Hussein of possessing weapons of mass destruction, which, however, were never found.