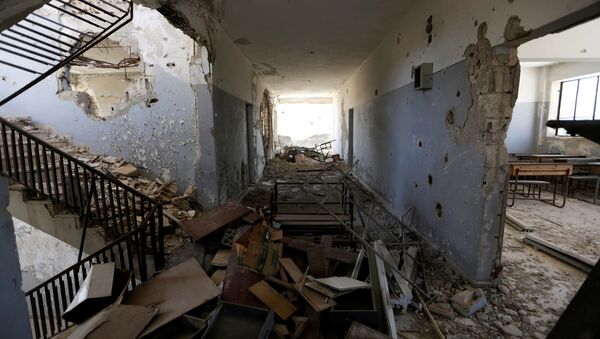 The US proposal to work with Russia on counterterrorism efforts if the Syrian government stops bombing the US-backed rebels in the country will generate no credibility in Moscow, veteran UN human rights adviser, author and Middle East analyst James Paul told Sputnik.

WASHINGTON (Sputnik) — The Obama administration has proposed a new agreement on Syria to Russia to deepen military cooperation between the two countries against some terrorists in exchange for Russia getting the Syrian government of President Bashar Assad to stop bombing US-supported rebels, US media reports said last week.

"The United States wants to shelter its Islamic allies in Syria from aerial attacks by the Russians in exchange for Washington's supposed help against other Islamic forces. This is not a bargain that the Russians are likely to find compelling," Paul said.

Paul pointed out the unsuccessful initiative was another example of the Obama’ administration’s attempts to protect the worst Islamist groups from being defeated and destroyed by Syria.

"We can well ask whether the United States should see the Daesh, the al-Nusra Front or Jaysh al-Islam as friendly allies."

The al-Nusra Front is the Syrian affiliate of al-Qaeda, which killed more than 3,000 people in its September 11, 2001 terror attacks on New York and Washington, DC.

Paul said that far from supporting secular democratic forces in Syria, the US government was arming and financing the most extreme Islamic movements that were determined to exterminate more tolerant ones.

Paul explained the real motivation for US policy in Syria was to maintain and extend its control over valuable energy resources in the region.

"The whole game is an example of geopolitics, a rivalry reflecting the importance of Middle East oil and gas resources."

‘Chilling’: US-Backed Syrian Groups’ Human Rights Atrocities Exposed
The US government and the country’s major energy and financial interests were determined to reverse the economic and political processes of 60 years, and reestablish their control over national oil corporations and the reserves they controlled, Paul warned.

"We are at the beginning of privatization of national oil companies. The big Western producer firms like Exxon and Shell want maximum leverage."

Because of those financial and strategic interests guiding US policy, Washington was unlikely to offer Moscow or Damascus any realistic compromise terms to seek a genuine early settlement to the Syrian civil war any time soon, Paul predicted.

"It appears that the war in Syria may continue its deadly course until the major powers can find a basis for a durable agreement."

James Paul served as Global Policy Forum Executive Director from its foundation in late 1993 through the end of 2012, and was the representative to the International Federation of Human Rights at the United Nations.