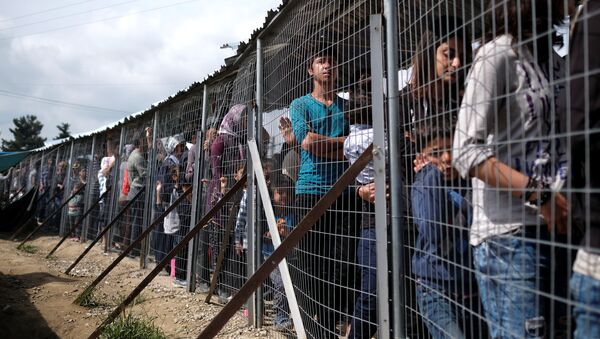 © REUTERS / Marko Djurica
Subscribe
International
India
Africa
European arms dealers who profit from conflicts in the Middle East and North Africa are not only being granted increasing numbers of licenses to sell weapons there; however, they're making even more money by lobbying the EU to install their security equipment in Europe.

Germany Arms Export Volume in 2015 Doubled Compared to 2014
Like peace itself, the military-industrial complex sees internal stability as bad for business. A new report has exposed the activities of military and security companies that are profiting from the ongoing conflicts in the Middle East and North Africa, which have also successfully lobbied the EU to react by buying their security equipment.

The joint report by the European NGO Stop Wapenhandel and the Transnational Institute (TNI), called "Border Wars: The Arms Dealers Profiting from Europe's Refugee Tragedy," reveals the most prominent winners of security contracts which were issued in Europe as a result of the migrant crisis, and Europe's acquiescent response to their lobbying.

"Some of the beneficiaries of border security contracts are some of the biggest arms sellers to the Middle-East and North-African region, fuelling the conflicts that are the cause of many of the refugees. In other words, the companies creating the crisis are then profiting from it."

The big players in Europe's border security complex include arms companies Airbus, Finmeccanica and Thales, which are also three of the top four European arms traders and have been particularly prominent winners of EU contracts aimed at strengthening borders.

Other companies to benefit from the EU's policy response to Middle Eastern conflict are French defense and aerospace company Safran, the Spanish IT and defense systems firm Indra Sistemas, and some Israeli companies like BTec Electronic Security Systems, which promote their expertise based on equipment installed at the Israeli-Palestinian border.

French companies Airbus and Thales, and Italian Finmeccanica, are part of the European Organisation for Security (EOS), which has been most active in lobbying the EU for increased border security. The report notes that many of its proposals, such as its push to set up a cross European border security agency, have eventually ended up as policy.

US Loses 'Dangerous Game' Delivering Arms to Syrian Rebels
According to the report, the booming border security market was worth an estimated 15 billion euros ($16.5 billion) in 2015, and is predicted to rise to over 29 billion euros ($32 billion) annually in 2022.

New EU member states have been required to strengthen borders as a condition of membership, creating additional markets for profit.

On Tuesday, the German newspaper Tagesspiegel newspaper revealed that the arms industry could benefit even further from a new direction in the EU's African policy.

UK High Court to Look Into British Arms Sales to Saudi Over Yemen Deaths
According to the report, the EU Commission intends to direct some funds from its Instrument contributing to Stability and Peace towards equipping African militaries.

"Development without security and stability is not possible," a source in the Commission told the newspaper.

"The Commission is therefore considering increasing its support for security actors," and "in some very special cases," this will include security forces.

The proposal to spend African development funds on security forces was criticized by the German Green Party MEP Reinhard Butikofer, who described it as "breaking a taboo."

She said the proposal is one of a series of "steps in the militarization of EU foreign policy."