Advisors Should Have Challenged Blair Over Iraq Invasion - Peace Expert 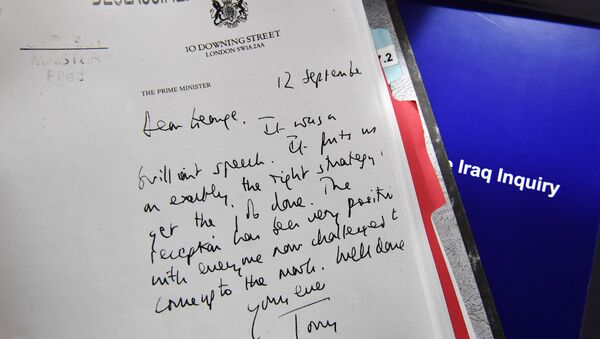 A leading academic on peace studies has told Sputnik that cabinet members and senior officials should have stood up to Tony Blair in the run-up to the controversial invasion of Iraq in 2003, which many thought was an illegal war that has devastated the country.

Paul Rogers, Professor of Peace Studies at the University of Bradford told Sputnik: "This is a tough report which does not pull punches. It's the opposite end of the scale from whitewash. It doesn't apportion blame directly, but — among other things — it makes clear that, in its view, this was not a war of last resort, there were still other options."

"The threat level from the Saddam Hussein regime seems to have been exaggerated. The consequences of going to war and what would happen were not thought through. The actual planning for British involvement was of low quality and the government largely failed to achieve its objectives."

The Chilcot report states that — at that point in 2002 — Blair was calling for a further United Nations resolution to gain the authority to go to war, which he failed, in the end to get. He also wanted a shift in public opinion towards war and progress on the wider Middle East talks to support his backing of the US.

A great deal rested on the legal advice Blair was given by the Attorney General at the time, Lord Goldsmith. The UN Security Council had passed resolution 1441, which condemned Iraq over its weapons of mass destruction, but there was a huge debate as to whether it gave authority for an invasion.

The Chilcot Report states that Goldsmith said there was a "reasonable case" for saying that — if Saddam Hussein had breached resolution 1441, calling him to comply with the agencies inspecting his weapons sites — then there could be a case for invasion.

"This is to confirm that it is indeed the Prime Minister's unequivocal view that Iraq is in further material breach of its obligations, as in OP4 of UNSCR 1441, because of 'false statements or omissions in the declarations submitted by Iraq pursuant to this resolution and failure to comply with, and co‑operate fully in the interpretation of, this resolution.' "

The Chilcot report suggests that it was Blair alone — without any other backing — who deemed there was legal force to go to war. The report states: "It is unclear what specific grounds Mr Blair relied upon in reaching his view." That comment leaves open the question of Blair's possible prosecution.

The Bush administration did have a plan for post-war Iraq but it was a complete failure:https://t.co/L8aOsOyH3G

"Chilcot left open the question about prosecution, rather than closing it up, saying it wasn't appropriate. But there is also criticism of other elements of the establishment. There is an implication that the Chilcot people, believe that people should have stood up to Blair more than they did and maybe even argued with him on the way in which intelligence was being interpreted," ​Paul Rogers told Sputnik.

"So I think it may well be that — when we get a chance to look at the detail of the report — there will be major questions over the role of MI6 and particularly the Joint Intelligence staff in the Cabinet Office and the Joint Intelligence Committee, which is made up of the heads of all the security agencies, plus other people," Rogers told Sputnik.