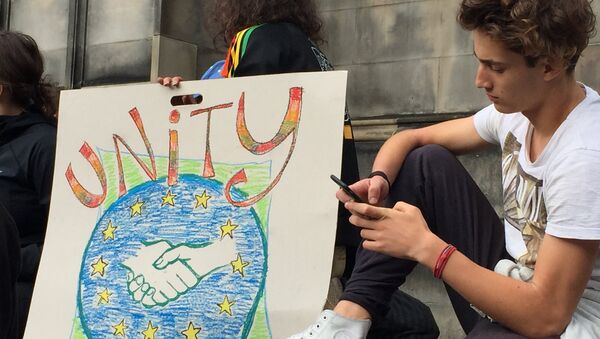 A new campaign is underway in the UK to try and stamp out the rise in xenophobia towards eastern and central European migrants living in Britain, following the European Union referendum.

London Police Register 50% More Reports of Hate Crimes After Brexit Vote
Following a win for the Vote Leave campaign, hate crimes have doubled, according to figures from London's Metropolitan Police.

A London Polish center was defaced, discriminatory language was daubed on a sign in Merton, a group of men in Manchester racially abused another passenger on a tram and people have reported being harassed just because they speak another language on the streets of Britain.

"There is something nasty going on in our country today," said charity Hope Not Hate.

"Eastern and central Europeans are being told that they are no longer welcome here. Ethnic minority Britons have been told to ‘go home' and Muslims and Jews have been abused on the street," the charity states.

"The toxic nature of the Referendum debate has unleashed visceral hatred."

Almost 600 hate crimes have been reported to London's Metropolitan Police since the day the UK voted to exit the European Union and 2 July, double the number reported before the referendum.

Read our blog: 10 quotes that encourage us to stand up against #hatecrime https://t.co/esNm0d2q3I #WednesdayWisdom pic.twitter.com/Np7hQgUTCv

​A campaign, #MoreInCommon has been launched by Hope Not Hate to neutralize the xenophobic rhetoric that has risen across the UK.

​In the coming weeks, #MoreInCommon meetings will be held around the country "to organize our response to this hatred," according to the charity.

Scotland Yard has received an average of 67 allegations of hate crimes each day.

"We can report there has been an increase in hate crime offenses since the UK EU referendum," said Mak Chishty, Commander for Engagement for London's Metropolitan Police Service.

"We are carefully analyzing every incident to see what is happening across London and these figures may change as victims come forward and report incidents to police as soon as possible," Commander Mak Chishty said, adding that people are, "feeling anxious at the perception of increased intolerance against certain communities."

Meanwhile, East London has taken a leaf out of Bristol's book, offering a flower for any migrant passing in Hackney, to remind them that they are welcome in the UK.