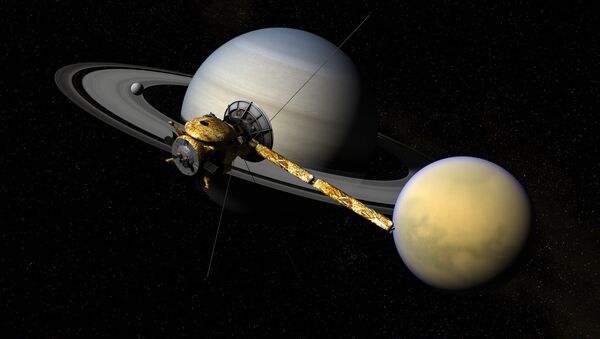 Saturn's largest moon Titan is, in some key respects, considered more Earth-like than any other body in the solar system. Now scientists are asking if the cloud-covered moon could have life as well.

Not long ago, according to an article in the Proceedings of the National Academy of Sciences, chemists and physicists at Cornell University proved that Saturn’s largest moon Titan could host life due to the presence of a certain type of  molecule on the moon’s surface that reacts in a way akin to life's so-called 'building blocks' at very low temperatures.

An interesting fact is that Titan is Earth's closest analogue in the solar system; it has a dense atmosphere, as well as a climate, weather and even rain. On various tectonic processes appear on the Saturnian moon, organic seas and rivers exist, and there is also a large amount of nitrogen and other components stimulating the appearance of life.

Scientists Piece Together the 'Song of Fire and Ice' That Created Earth
This promising discovery might prompt scientists to commence a proper analysis of whether life can develop without the presence of water. Indeed no life can occur in Titan’s lakes due to the nitrogen and ethane present in them.

However, Cornell University Professor Martin Rahm and his colleagues claim that the key to the birth of life on Titan hides in organic molecules, which exist in recently-found slime at the bottom of its methane seas. Their research found a polymer structure, in the science world known as a polyamine, which consists in itself nitrogen, hydrogen and carbon, and forms from covalent and hydrogen bonds. Professors are convinced that these reactions operate in a traditional way by absorbing light and heat in the form present on Saturn’s moon.

It then appears that the form of life chemists of Cornell University are talking about is nitric life, which could lead science to a new era of development.