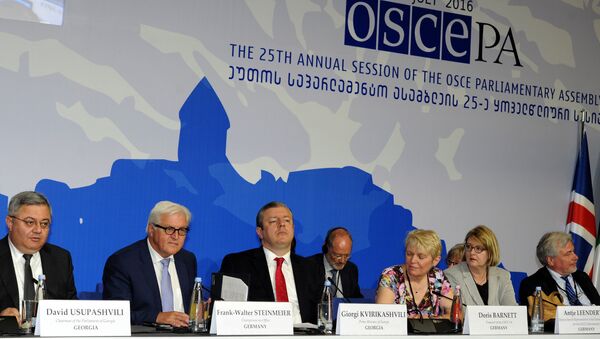 The 25th Annual Session of the OSCE PA closed on Tuesday in Tbilisi, Georgia with some fruitful results.

OSCE Parliament Must Change in Order to Address Migration, Terrorism
TBILISI (Sputnik) — The 25th Annual Session of the Organization for Security and Co-operation in Europe Parliamentary Assembly (OSCE PA) closed on Tuesday in Tbilisi, Georgia, with the adoption of the 2016 Tbilisi Declaration focusing on security, migration and human rights issues.

The Annual Session is the largest event on the OSCE PA calendar that brought together nearly 300 delegates for a five-day debate under the banner "25 Years of Parliamentary Co-operation: Building Trust Through Dialogue."

According to the OSCE PA Secretariat, the 2016 Tbilisi Declaration includes "the Assembly's wide-ranging pronouncements and policy recommendations for the OSCE and its participating States in the fields of political affairs, economics, the environment and human rights."

Ukrainian Delegation to OSCE PA Opposes Lifting of Anti-Russian Sanctions
Resolutions focusing on security issues in the OSCE area, economic cooperation, current challenges in the sphere of human rights, global migration problems and the terrorist threat, adopted during the session, served as the basis for the Tbilisi Declaration.

Among the resolutions annexed to the Tbilisi Declaration, the one proposed by the Russian delegation called on the OSCE PA to stress the need to equip passenger aircraft with additional technical means of monitoring conditions on board in real time.

Another resolution included in the declaration, proposed by a Swiss delegate, called on the participating states to provide unrestricted access for OSCE PA members to attend official OSCE events and other activities. The document was proposed by Filippo Lombardi, the head of the Swiss delegation, in light of the situation with the Russian delegation when it refused to attend the OSCE PA summer session in Helsinki in July 2015 in protest against the Finnish authorities’ decision to deny entry to lawmakers included in the EU sanctions list, Russian State Duma speaker Sergei Naryshkin being one of them.

OSCE PA President Believes Major Changes in EU Needed After Brexit
Other resolutions annexed to the final declaration include the resolution regarding the conflict in Georgia, the document calling for re-consolidating European security as a common project, and the resolution on enhanced cooperation and confidence-building measures in the Baltic Sea region that encourages the establishment of a multilateral security monitoring body and intensification of cross-border cooperation in the fight against human trafficking and illegal immigration.

The OSCE is the world’s largest regional security organization made up of 57 nations. The Parliamentary Assembly connects the parliaments of the OSCE member nations.