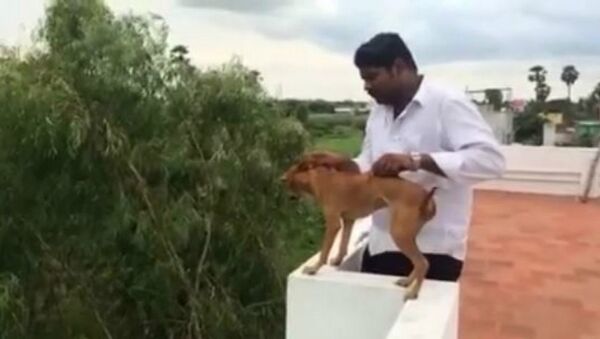 As a horrifying video of a dog sent plummeting down a building goes viral, animal lovers in India have begun to exert pressure on the police to nab the culprits.

NEW DELHI (Sputnik): "A man wearing a white shirt is seen holding a dog by the scruff, he places it on the palisade of a roof and as the dog whimpers, he passes a cunning smile and hurtles the dog down the multistorey building. Apparently, another man is present at the scene, video-recording the entire act that ends with the dog squealing in pain as it falls thud on the ground."

Environment's Best Friend: Iranian Dog Bins Trash Humans Leave in Street
This is not a scene from a horror movie but a reality video being widely circulated in India via social media and mobile phone applications.

The extreme cruelty has enraged animal rights activists and pet lovers in India to launch a massive campaign, prompting the police to launch a hunt for the two culprits, who are allegedly on the run. Following the incident the police cyber-crime department launched a probe; it was found that the two were students of a medical college in the southern city of Chennai. When police reached the college for investigations, fellow students confirmed that the two had escaped.