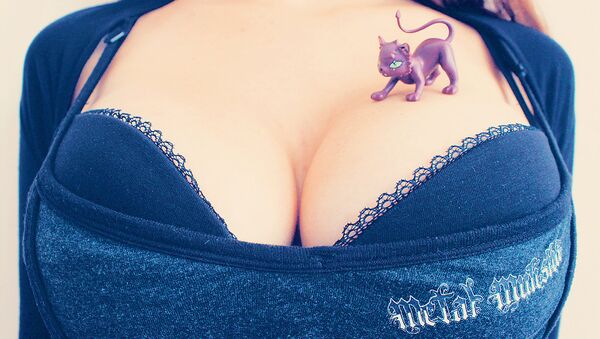 The German political party Die Partei reportedly decided to kick off its election campaign with its 'cleavages over degrees' initiative.

Poll Shows 10% of Voters Prefer a Giant Meteorite to Trump or Clinton
In an interview with Sputnik, Moritz Hahn, representative of the German satirical party Die Partei, heaped praise on the party's gonzo campaign to launch its bid for election.

The campaign, which urged students to consider electing busty women rather than brainy lads, saw scores of leaflets distributed on the streets of Tubingen, where one of the oldest universities in Germany is located.

Asked about factors that added to the party's success, Moritz Hahn said that "the voters finally realized the fact that Die Partei is a very good party," capable of holding "a few prestigious events."

"We took part in the public debate and proved that we are the best team of our university. During this speech, I stood on the stage and had a beer, which was appreciated; the voters loved it. And of course they liked our 'cleavages over degrees' flyers that we distributed in the dining room and on the streets," he said.

Hahn added that accusations that Die Partei was sexist hold no water.

"Some passers-by said that we allegedly only want to show boobs and that it is sexist. But we did not intend to do it. We wanted to show that election lists include not only me but also other people, such as Mary, who can be seen on the fliers," he said.

‘American Democracy is Not Democratic’: Voters Lose Faith in US Elections
Founded in 2004, Die Partei is led by Martin Sonneborn, a German satirist and Member of the European Parliament.

According to the Economist, the party's platform has become less bellicose since 2004, given that instead of supporting aggression against Liechtenstein and the rebuilding of the Berlin Wall, the party currently focuses on reducing working hours and getting rid of daylight-saving time.