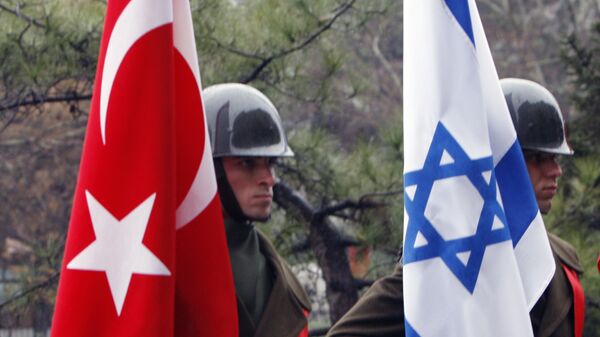 Turkey's Main Opposition Party Slams Ankara's Legitimation of Gaza Blockade
Against the background of the warming in Turkish-Israeli relations which followed an agreement on the normalization of ties, a war of words has emerged between Turkish President Recep Tayyip Erdogan and the IHH Humanitarian Relief Foundation, which organized the fateful Freedom Flotilla Convoy which tried to send humanitarian aid to the Gaza Strip in 2010. Attempting to approach Gaza with aid and activists onboard, the flotilla was blocked and stormed by Israeli special forces, resulting in the deaths of ten Turkish citizens and the breakdown of Turkish-Israeli relations.

IHH officials strongly criticized last week's normalization of ties, and Turkey's apparent decision to back down from an earlier position stating that relations could not be normalized until the Gaza blockade was lifted.

Asked to comment on the apparent rupture in ties between the government and the IHH, Faruk Gergerlioglu, the former chair of the Association for Human Rights and Solidarity for the Oppressed told Sputnik Turkey that information on negotiations between Israel and Turkey appeared in the media half a year ago, and that the government had prepped the public for such a development.

"In recent years, Erdogan persistently nurtured plans for the implementation of his neo-Ottoman project," the activist recalled. "When he was prime minister, he actively directed the government in this direction. Having become president, he continued to move in the same direction. But after some time it became clear that this idea was doomed to failure. Of course he did not say so publically. However, it's likely that in consultations behind closed doors with his advisors, he was warned that Turkish policy toward Syria, Egypt, Russia and Israel were extremely inefficient, and required a review. In the end, the president began thinking about the need to change his foreign policy strategy, and made a step in this direction."

Israel Sees ‘Immense’ Economic Gains by Making Friends With Turkey
Accordingly, Gergerlioglu noted, President Erdogan was forced to take back his words and come to terms with giving up the dream of reviving the Ottoman Empire. "Sending the MV Mavi Mramara ship [to Gaza in 2010] was an act of muscle-flexing in relation to Israel. It was absolutely obvious that the country's leadership stood behind this action. Nevertheless, the government insisted that it had nothing to do with it. 'This was an act by civil society', they said. Meanwhile, we knew that the government was behind it, and so did Israel. It was expected, and 10 people died as a result."

After the incident, the activist recalled, the government expressed a 'tough and uncompromising stance' toward Tel Aviv. "This continued until Erdogan realized that his 'heroic rhetoric' and dreams of neo-Ottomanism were not bringing the expected results."

"Instead of a victory, Turkey admitted its defeat. The agreement concluded with Israel has turned us into a country which officially recognizes the legitimacy of the Gaza blockade. Ultimately, Turkey agreed to Israel's proposal, made six years ago, on the shipment of humanitarian aid through Ashdod, Israel, from where it will be delivered to Gaza by the Israeli side."

Furthermore, "in studying the text of the agreement, it is noticeable that it uses the expression 'humanitarian aid', but does not oblige Tel Aviv toward anything concrete. From a legal point of view, this formulation protects the interests of Israel, and provides it with certain assurances. But such details, of course, are not revealed to ordinary Turks."

Black Sea Buddies: Turkey Looks to Cosy Up to Coastal Neighbors
Ultimately, Gergerlioglu suggested that over the long term, Erdogan's scuffle with the IHH, once seen as a thoroughly pro-government group, will have consequences for the ruling Justice and Development Party's electorate. "The AKP's electoral base is amazing. It is so consolidated that it can be made to believe the most unbelievable statements, up to and including conspiracy theories of plots by foreign powers to overthrow Erdogan's government. But it cannot be forgotten that the issue of relations with Israel is very important for AKP supporters. Therefore, I believe that part of the conservative electorate was disappointed in the actions of the party in this direction."

"The consequences will yet manifest themselves. The IHH Foundation is a religious community and charity known for being close to the AKP. I expect the resulting tension between the two to play out in a series of proceedings, high profile statements and allegations," the activist concluded.