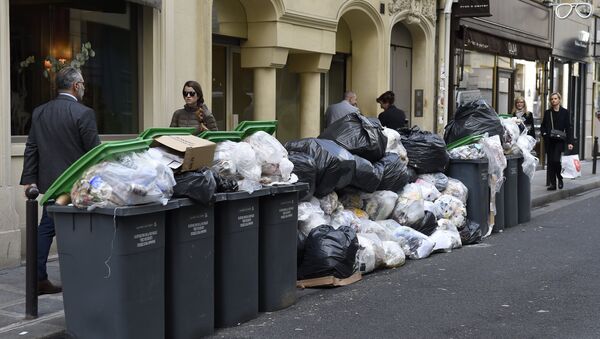 © AFP 2021 / ERIC FEFERBERG
Subscribe
France has banned plastic grocery bags from July 1, in an effort to reduce their use; an estimated 17 billion are used in France per year.

French Farmers Crying Fowl after Four-Month Foie Gras Ban
France has boosted its ecological credentials with a recent ban on plastic grocery bags, which came into effect on July 1.

However, shops will still be allowed to sell shopping bags to customers that are thicker than 50 micrometers, on the basis that they are reusable.

The ban on common grocery bags will be followed by a ban on small plastic bags used for fruit and vegetables, or meat and fish, which will go into force on January 1, 2017.

According to the French government, five billion plastic bags are given out at checkout counters in France each year, and 12 billion are used to wrap fruit and vegetables.

The ban came into force just in time for International Plastic Bag Free Day on July 3.

The government hopes that the new law will put France on a par with more environmentally friendly countries like Denmark and Finland, where inhabitants only use an average of four plastic bags per year.

​​Citizens of these Nordic countries are way ahead of the average European, who uses 198 plastic bags per year.

France is not the first EU country to ban plastic bags, since Italy banned the sale of non-biodegradable plastic bags in 2013.

In April 2015 the EU Parliament ruled that member states must reduce plastic bag use by 80 percent by 2025.

​While some countries like France have opted for a ban, others like Ireland and the UK have introduced plastic bag charges in an effort to minimize their use.

It is estimated that 100 billion plastic grocery bags are used across Europe per year, with 8 billion ending up as litter.

Depending on the type of plastic, these bags have been estimated to take between 100 and 500 years to decompose in the environment, where they pose a great risk to wildlife.

Health Risk: People Are Ingesting Plastic By Eating Ocean Fish
According to a study published in the peer-reviewed journal PLOS ONE in December 2014, there are a minimum of 5.25 trillion pieces of plastic debris in the world's oceans.

Because plastic takes so long to decompose, much longer than an animal does, one piece can kill several living creatures.

In September, 2015 Australian scientists estimated that as many as nine in ten seabirds have plastic in their gut, and that increasing rates of ingestion mean that this figure will reach 99 percent of all species by 2050 unless there is more effective waste management.

000000
Popular comments
Bravo France!!! Growing up, many moons ago, there were no plastic bags and we managed too.
peskyvera
4 July 2016, 19:18 GMT
000000
Newsfeed
0
New firstOld first
loader
LIVE
Заголовок открываемого материала
Access to the chat has been blocked for violating the rules . You will be able to participate again through:∞. If you do not agree with the blocking, please use the feedback form
The discussion is closed. You can participate in the discussion within 24 hours after the publication of the article.
To participate in the discussion
log in or register
loader
Chats
Заголовок открываемого материала
Worldwide
InternationalEnglishEnglishMundoEspañolSpanish
Europe
DeutschlandDeutschGermanFranceFrançaisFrenchΕλλάδαΕλληνικάGreekItaliaItalianoItalianČeská republikaČeštinaCzechPolskaPolskiPolishСрбиjаСрпскиSerbianLatvijaLatviešuLatvianLietuvaLietuviųLithuanianMoldovaMoldoveneascăMoldavianБеларусьБеларускiBelarusian
Transcaucasia
ԱրմենիաՀայերենArmenianАҧсныАҧсышәалаAbkhazХуссар ИрыстонИронауОssetianსაქართველოქართულიGeorgianAzərbaycanАzərbaycancaAzerbaijani
Middle East
Sputnik عربيArabicArabicTürkiyeTürkçeTurkishSputnik ایرانPersianPersianSputnik افغانستانDariDari
Central Asia
ҚазақстанҚазақ тіліKazakhКыргызстанКыргызчаKyrgyzOʻzbekistonЎзбекчаUzbekТоҷикистонТоҷикӣTajik
East & Southeast Asia
Việt NamTiếng ViệtVietnamese日本日本語Japanese俄罗斯卫星通讯社中文（简体）Chinese (simplified)俄罗斯卫星通讯社中文（繁体）Chinese (traditional)
South America
BrasilPortuguêsPortuguese
NewsfeedBreaking
18:59 GMTManchester United’s Glut of Attackers Giving Ole Gunnar Solskjaer ‘Headaches’
18:50 GMT‘The View’ Co-hosts Test Positive for Covid Minutes Before VP Harris Interview
18:10 GMTHuawei CFO Meng Wanzhou Pleads Not Guilty to Fraud, Conspiracy Charges After Reaching Deal With US
18:04 GMTOne Hundred and Counting: China Rolls Out Evidence of US Attempts at Meddling in Hong Kong Affairs
17:56 GMTCan He Hit a Ball Like That? Trump Jeers at Biden as He Shows Off Golfing Skills
17:54 GMTProtesting Indian Farmers’ Leader Urges US President to Raise Their Concerns While Meeting PM Modi
17:47 GMTUnited Airlines Fined $1.9M by US Transportation Dept. for Breaking Rules on Long Tarmac Delays
17:38 GMTNetizens Left in Stitches After Canadian PM Trudeau Fails to Pronounce LGBTQ2+
17:24 GMTAhead of QUAD Meeting, Congress Leader Rahul Gandhi Taunts PM Modi, Says He's 'Scared of China'
17:01 GMTThousands of Healthcare Activists Hold Nationwide Protest in India Demanding Better Pay, Facilities
16:55 GMT'Lying Diplomacy': China Hits Out at India, Japan as Quad Members Accused It of Economic Coercion
16:52 GMTUS Treasury Greenlights Certain Transactions With Taliban
16:48 GMTWeak, Boring and Out-of-Touch: Labour Leader Panned by Voters on Eve of Conference
16:36 GMTMessi to Miss Montpellier Game, But May Feature in PSG's Blockbuster Clash Against Man City
16:29 GMTIsraeli Spy Cell Might Have Stolen Sensitive Defence Industry Data From Ankara, Turkish Media Claims
16:24 GMTNovatek Says Has Nothing to Do With Gyetvay Trial in US But Will Support Its Top Manager
16:18 GMTBitcoin, Ethereum Fall as China Declares All Cryptocurrency-Related Transactions Illegal
16:17 GMTSoon, Football Fans in Britain Might Say 'Cheers' in Stadiums
16:14 GMTUS Reaches Deal With Huawei CFO Meng to Resolve Charges
16:05 GMTGermany Holding Last Election Rallies Before Voting