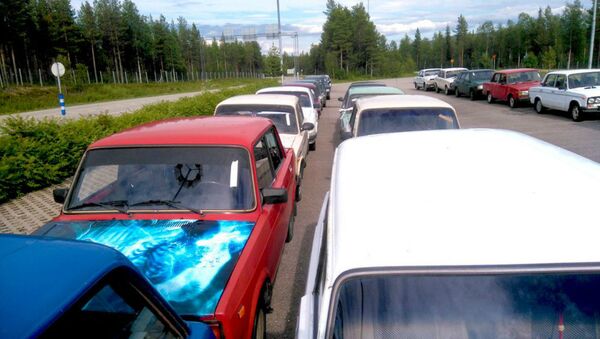 Over 100 Soviet-made cars, which were driven into northern Finland across the Russian border last year by asylum-seekers and subsequently abandoned at the Salla border crossing point, have been earmarked for auction in mid-July. Despite their ripe old age, some models are rare in the West and are expected to spark an interest among collectors.

The great car sale has been dubbed "The Big Eastern Car Auction" locally and is expected to draw the media, collectors and the curious public to the tiny northern Finnish municipality of Salla, which is located near the Russian border and has a population of 3,700.

The 130 cars, including battered old Ladas, Volgas and Moskvitchs, were bought as "getaway cars" by asylum-seekers in Murmansk region last winter, after Finland barred them from cycling across the border. After ultimately crossing the border, the vehicles were either seized by border authorities or abandoned by their temporary owners, Salla municipality wrote on its website.

Over 100 cars, used by refugees who entered Finland from Russia, stand idly at a recycling centre in Salla, Finland. pic.twitter.com/bDaCuMgzTB

​Most of the cars were bought for peanuts and are, as expected, in poor condition. However, as the batch includes a number of rarities that may interest collectors, inquiries have been coming from across the country as well as abroad. The Soviet car auction is therefore set to be the focal point of a whole weekend promotion event.

​Finnish Customs' plan is to publish an itemized catalogue of the event, both online and in paper form. As the cars were never properly imported, future buyers will therefore be responsible for relevant taxes and motor vehicle inspections.

The stream of asylum-seekers to Finnish Lapland via Russia dried up after drastic bilateral measures were adopted. After Finland and Russia negotiated an agreement to put a stop to the flow of all third-country border crossings for 180 days at the beginning of April, no asylum-seeker has set foot into Finland.

​Since August 2015, thousands of asylum seekers had entered Finland via its border with Russia in Lapland. At first, asylum-seekers would ride bikes into Finland through border stations in Salla and Raja-Jooseppi, only to switch to buying obsolete cars from obliging locals.