Law or Politics? Philippines Urged to Ignore Hague Ruling and Talk to China 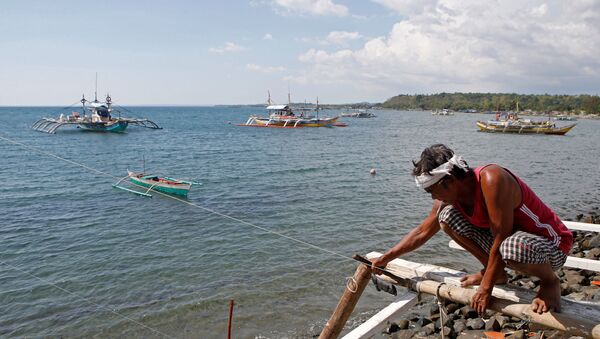 © REUTERS / Erik De Castro
Subscribe
The Philippines should do more to reach a consensus with Beijing over their dispute in the South China Sea and prevent bilateral relations from deteriorating, political analyst Vladimir Yevseyev told Sputnik.

Philippines Elected President May Help Improve Relations With China
In an interview with Sputnik, political analyst Vladimir Yevseyev urged Manila to show more readiness for a political accommodation with China over their South China Sea spat so that the two sides can bolster bilateral ties.

The interview came after the China Daily newspaper quoted unnamed diplomatic sources as saying that Beijing called on the Philippines not to consider the results of The Hague-based arbitration panel on the South China Sea, due to be announced July 12.

According to the newspaper, China made it plain that it will not resume negotiations with the Philippines if they are based on the decisions of The Hague arbitration court. 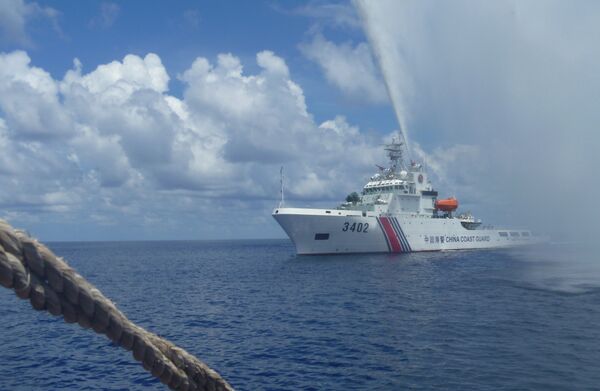 Negotiations between China and the Philippines may include "such issues as bilateral cooperation in the scientific sector if Manila postpones The Hague court's decisions ahead of the talks," the China Daily said.

Commenting on the matter, Vladimir Yevseyev told Sputnik that the Philippines should focus on clinching a compromise with China so as to avoid the deterioration of bilateral ties.

"According to available information, China has serious internal levers of influence on the Philippines authorities. So I think that Manila should seek a compromise in order not to create additional difficulties especially now that it is not supported by the United States," he said.

He was echoed by Shen Shishun, of the China Institute of International Studies, who also called for developing bilateral collaboration during a separate interview with Sputnik. 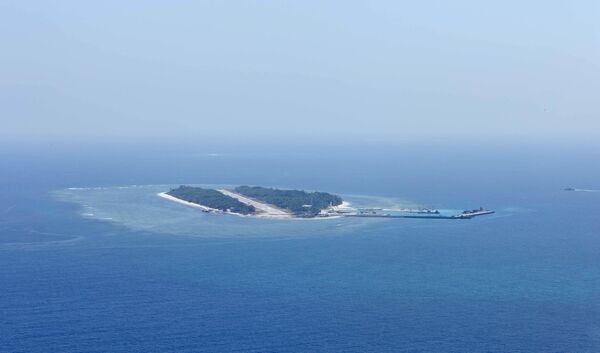 An aerial photo taken though a glass window of a Taiwanese military plane shows the view of Itu Aba, which the Taiwanese call Taiping, at the South China Sea, March 23, 2016
© REUTERS / Ministry of Foreign Affairs/Handout via Reuters/File Photo

When asked whether Manila is able to demonstrate political wisdom by respond to Beijing's proposal, Shishun remained cautiously optimistic about the issue.

"This is the way for the Philippines to improve relations with China. Now that Rodrigo Duterte came to power in the Philippines, there is a hope for the improvement in Sino-Philippine relations," Shishun said.

Right now, The Hague arbitration court is dealing with the Philippines's lawsuit against Beijing over its allegedly illegal actions in the South China Sea.

South China Sea: Japanese Warships Dock in Philippines Near Disputed Waters
The lawsuit was filed in 2013, a year after China actually took control of the Scarborough Shoal atoll, located 140 miles from the Philippines and, within its 200-mile exclusive economic zone, according to Manila.

000000
Popular comments
Brussels has no jurisdiction on China sea. They can go fark themselves unless they want an all out war.
copius
1 November 2016, 20:51 GMT
000000
Newsfeed
0
New firstOld first
loader
LIVE
Заголовок открываемого материала
Access to the chat has been blocked for violating the rules . You will be able to participate again through:∞. If you do not agree with the blocking, please use the feedback form
The discussion is closed. You can participate in the discussion within 24 hours after the publication of the article.
To participate in the discussion
log in or register
loader
Chats
Заголовок открываемого материала
Worldwide
InternationalEnglishEnglishMundoEspañolSpanish
Europe
DeutschlandDeutschGermanFranceFrançaisFrenchΕλλάδαΕλληνικάGreekItaliaItalianoItalianČeská republikaČeštinaCzechPolskaPolskiPolishСрбиjаСрпскиSerbianLatvijaLatviešuLatvianLietuvaLietuviųLithuanianMoldovaMoldoveneascăMoldavianБеларусьБеларускiBelarusian
Transcaucasia
ԱրմենիաՀայերենArmenianАҧсныАҧсышәалаAbkhazХуссар ИрыстонИронауОssetianსაქართველოქართულიGeorgianAzərbaycanАzərbaycancaAzerbaijani
Middle East
Sputnik عربيArabicArabicTürkiyeTürkçeTurkishSputnik ایرانPersianPersianSputnik افغانستانDariDari
Central Asia
ҚазақстанҚазақ тіліKazakhКыргызстанКыргызчаKyrgyzOʻzbekistonЎзбекчаUzbekТоҷикистонТоҷикӣTajik
East & Southeast Asia
Việt NamTiếng ViệtVietnamese日本日本語Japanese俄罗斯卫星通讯社中文（简体）Chinese (simplified)俄罗斯卫星通讯社中文（繁体）Chinese (traditional)
South America
BrasilPortuguêsPortuguese
NewsfeedBreaking
14:51 GMTEU Not Informed About New US, UK & Australia Alliance, Plans ‘to Assess Implications’
14:48 GMT'BJP's Politics Behind 96% Jump in Communal Riots in India', Says Opposition Congress
14:46 GMT‘No Friend of China’: As Raab Exits Stage Left, What Will UK Foreign Policy Look Like Under Truss?
14:34 GMTSouth African Child Maintenance Payments Delayed by Ransomware Attack
14:34 GMTEuropean Gas Futures Fall Below $750 Per 1,000 Cubic Meters
14:29 GMTIs the Age of the Car Over as Politicians Around Europe Declare War on the Motorist?
14:29 GMTMessage for India? AUKUS Announcement Sparks Debate About Relevance of Quad, Reliability of US
14:15 GMTBlack Market Business for Foreign Visas Skyrockets in Afghanistan, Reports Say
13:29 GMTSequoia National Park in California Closes Due to Massive Wildfire, Administration Says
13:28 GMTRussia Threatens to Take Measures Against US Over Interference in Elections, Foreign Ministry Says
13:28 GMTCricketer Virat Kohli Confirms He Will Step Down as India's T20I Captain After ICC T20 World Cup
13:22 GMTShell Touts Plans for One of Europe's Largest Biofuel Plants
13:16 GMTWomen's Average Salary in Saudi Arabia Has Exceeded That of Men for the First Time, Report Says
13:10 GMTNo More Words: Microsoft Allows Use of Facial Recognition or Fingerprints Instead of Password
12:50 GMTNew Zealand Being Left Out of AUKUS Shows Canberra, Wellington 'Going in Very Different Directions'
12:14 GMTBiden Went For Full Afghanistan Pullout Despite His Cabinet's Advice, Book Claims
12:04 GMTChina Plans to Launch Experimental Reactor That May Revolutionise Atomic Energy Industry
11:26 GMTFrance May Demand Compensation From Australia for Submarine Deal Breach, Defence Minister Says
11:22 GMTKremlin Regrets European Parliament's Russia Report
11:08 GMTRussia Uses 'Best Suited' Internet Regulation, Kremlin Says