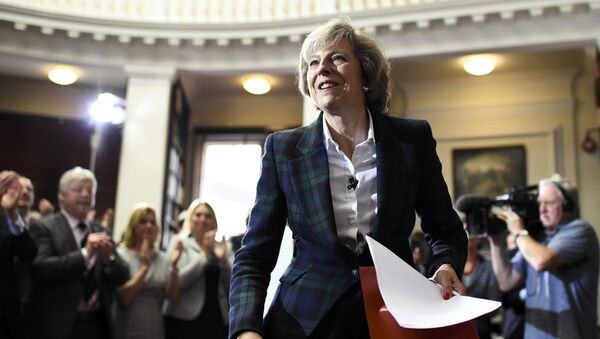 © REUTERS / Dylan Martinez
Subscribe
The two leading candidates to become the next British Prime Minister after David Cameron’s resignation, are both women breaking through the glass ceiling, but hold very different opinions on when to start the process the country voted for.

Britain’s Next PM? Leadsom Trounces Gove, Becomes Top Pro-Brexit Candidate
After David Cameron's resignation in the wake of Brexit referendum, two main candidates to become the next PM emerged — the Interior Minister Theresa May, who campaigned for a Remain vote and Minister of State for Energy Andrea Leadsom, a representative of Leave campaign. Whoever wins, they will have to deal with the difficulties Brexit process and it seems that the candidates share significantly different opinions.

According to Theresa May, the UK should not invoke the Article 50 of Lisbon Treaty (which determines the way the country leaves the EU) before the end of the year.

"I don't think it's possible to say there's an absolute deadline, because what's important is that we do this in the right timescale and that we do it to get the right deal for the UK. So I've said that we shouldn't invoke Article 50 immediately. I've said it shouldn't be before the end of the year," May said.

Theresa May's PM Bid to Shorten UK Uncertainty Period - UK Delegation Head
May insists that negotiation stance should be elaborated and declared before the triggering of Article 50, because after that, changing things would be basically impossible.

Her rival Andrea Leadsom, on the contrary, insists that the UK should trigger Article 50 as soon as possible. She says this will send a clear message of certainty for business.

"What I do believe is that we need to get on with it. We need to seize the opportunity, it's not just about leaving the EU but it's about giving certainty to businesses, it's about saying to the world 'we're open for business, let's get some free trade agreements started as soon as we can," Leadsom said.

The Brexit process is likely to become the key point in PM race, as some, such as Ms Leadsom herself, as well as Justice Minister Michael Gove, believe the next leader should be the Leave supporter (which is not without logic, since the country voted for Leave), while the critics, including Ms May, say the country needs not just the "Brexit leader", but a leader who will rule the country effectively in every aspect.

Remarkably, the instant invoking of Article 50 is advocated by both a number of Conservative MPs inside British Parliament and by leaders of EU countries who suffer from extended period of uncertainty. The fear of oncoming destabilization has made the EU leaders to put pressure on Britain to invoke Article 50 as soon as possible.

000000
Popular comments
May is a Remainer. she has no morality, no scruples and will do whatever the elite tells her to. You can bet if we have her foisted on us Brexit will be almost impossible.

Gold
4 July 2016, 09:19 GMT1
000000
Of course Teresa May will win over Andrea Leadsom. Theresa May has proven to be one of the most prominent bigot of Islam, and is well-funded by Saudi Arabia regime. She ordered to arrest a journalist David Miranda, the partner of Guardian journalist Glenn Greenwald, and to ban American citizens Pamela Geller and Robert Spencer from entering the UK. Good service record of pro-islamist actions accompanied with generous funding from Saudis is enough to defeat Andrea Leadsom. I still hope the people of the Great Britain remember who's interests Theresa May represents, and will not vote for her, though the chances are bleak.
mishalipin
4 July 2016, 08:35 GMT
000000
Newsfeed
0
New firstOld first
loader
LIVE
Заголовок открываемого материала
Access to the chat has been blocked for violating the rules . You will be able to participate again through:∞. If you do not agree with the blocking, please use the feedback form
The discussion is closed. You can participate in the discussion within 24 hours after the publication of the article.
To participate in the discussion
log in or register
loader
Chats
Заголовок открываемого материала
Worldwide
InternationalEnglishEnglishMundoEspañolSpanish
Europe
DeutschlandDeutschGermanFranceFrançaisFrenchΕλλάδαΕλληνικάGreekItaliaItalianoItalianČeská republikaČeštinaCzechPolskaPolskiPolishСрбиjаСрпскиSerbianLatvijaLatviešuLatvianLietuvaLietuviųLithuanianMoldovaMoldoveneascăMoldavianБеларусьБеларускiBelarusian
Transcaucasia
ԱրմենիաՀայերենArmenianАҧсныАҧсышәалаAbkhazХуссар ИрыстонИронауОssetianსაქართველოქართულიGeorgianAzərbaycanАzərbaycancaAzerbaijani
Middle East
Sputnik عربيArabicArabicTürkiyeTürkçeTurkishSputnik ایرانPersianPersianSputnik افغانستانDariDari
Central Asia
ҚазақстанҚазақ тіліKazakhКыргызстанКыргызчаKyrgyzOʻzbekistonЎзбекчаUzbekТоҷикистонТоҷикӣTajik
East & Southeast Asia
Việt NamTiếng ViệtVietnamese日本日本語Japanese俄罗斯卫星通讯社中文（简体）Chinese (simplified)俄罗斯卫星通讯社中文（繁体）Chinese (traditional)
South America
BrasilPortuguêsPortuguese
NewsfeedBreaking
18:25 GMTFive Held in India’s Karnataka for Asking Dalit Family to Pay Fine After Entering Temple
18:14 GMTFormer Treasury Secretaries Urge That US Debt Limit be Raised 'Without Delay'
18:07 GMTNo Genies in Sight: 'Well of Hell' Sinkhole of Yemen Explored by Cavers
17:42 GMTSaudi King Tells UN General Assembly Yemen's Houthis Reject Peaceful Solution to Conflict
17:35 GMTMessi Was 'Tyrant' to Barcelona Teammates in Training, Claims Manager Ronald Koeman
17:27 GMTInt'l Support Group for Lebanon Urges Government to Take Active Measures to Ease Crisis
17:07 GMTIndia: Anti-Terrorist Squad Arrests Islamic Cleric Over Religious Conversion Charge
17:01 GMT'Would Fire it Onto Ceiling': Prince Philip's Mustard Jokes Landed Him in Trouble With Queen
16:59 GMTREC Group Support for Kamaz Export Projects to Exceed 20 Billion Rubles
16:53 GMTThe Cypriot Caveat: Why Erdogan Shouldn't Call Russia Out on Crimea?
16:43 GMTPoland's PGNiG Says Received Right to Take Part in Certification of Nord Stream 2 Operator
16:39 GMTSotheby’s Puts Frida Kahlo’s Rare 1940 Self-Portrait Up for Auction
16:37 GMTFlash on Jupiter Possibly Caused by 'Alien Bomb,' Blogger Says
16:30 GMTIt's Massage Time: Bulldog Scratches Buddy's Back
16:29 GMTLNA Commander Haftar Instructs Col. Gen. al-Nazuri to Act LNA Head for Next 3 Months
16:20 GMTFrance to Return Ambassador to Washington Next Week After Macron-Biden Phone Call on AUKUS Spat
16:17 GMTWatch Haitian Deportees Throw Shoes at US Officials, Try to Storm Plane in Port-au-Prince
16:07 GMTPorn Actors' Trade Organisation Shakes Hands With Lobbying Firm to Get Protection From Congress
15:58 GMTEinstein’s 'Most Valuable Manuscript Ever' on Theory of Relativity May Fetch up to $4 Mlm at Auction
15:36 GMTUK TV, Radio Could Get Into Trouble for Using Terms 'Karen,' 'Snowflake' & 'Gammon'