Russia the 'Gatekeeper' in Creating a Diplomatic Solution for Syria 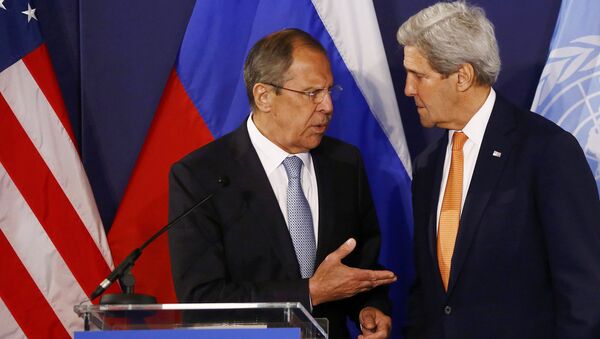 Russia remains "the decisive force" capable of resolving the Syrian war through diplomatic efforts, according to Sam Heller, a Beirut-based analyst specializing in Syrian affairs.

Russia, US Want to Cooperate in Syria But 'Are Suspicious of Each Other'
Washington should be reconciled to the fact that it is Russia that remains "a gatekeeper" when it comes to the diplomatic solution to the Syrian war, Sam Heller, a Beirut-based analyst specializing in Syria, wrote in an article which was published by the opinion website War on the Rocks.

Notably, the article is titled "Russia is in charge in Syria: How Moscow took control of the battlefield and negotiating table."

"Yet these diplomats seem to have mostly ignored Russia's role in Syria — and at least for now, it is Russia, not America, that is the decisive force in the Syrian war," Heller wrote.

He referred to Russia's air campaign in Syria, which was held between September 2015 and March 2016 and which Heller claimed was aimed "to establish itself as the central military actor in Syria's war."

"Russia has used its military primacy to oblige others — including the United States — to treat it as the gatekeeper to a negotiated solution to the [Syrian] conflict," he pointed out.

In his think piece, Heller quoted a whole array of Western diplomats and pro-Syrian government journalists as describing Russia's military support of the Assad regime and its allies as "the decisive factor on the Syrian battlefield."

In this vein, he specifically mentioned the deployment of sophisticated S-400 Russian missile systems on the Syrian coast in December 2015, something that Heller called "a potentially lethal threat to U.S. pilots attempting to strike the [Assad] regime."

According to him, "this deployment contributed to forcing the United States to 'de-conflict' its operations in Syria with those of Russia."

As far as talks on Syria are concerned, they are nominally sponsored by the International Syria Support Group, but it is Russia and the United States that clinched a bilateral arrangement on the negotiations and the cessation of hostilities, Heller recalled.

"Within that US-Russian dyad, it is primarily Russia that has agency. The negotiations and the cessation of hostilities have already broken Russia's diplomatic isolation and drawn the United States into stepped-up military and political cooperation," he wrote.

Farewell to Arms: Real Results of Russia's Air Campaign in Syria
In this context, Heller cited Western diplomats as praising Russian counterparts for "making a real effort to foster a political solution" on Syria "even if they don't want a political process on our terms."

Separately, Heller quoted Nikolay Kozhanov, of the Carnegie Moscow Center, as saying that unlike many of its Western counterparts, Russia has its own vision of a political resolution to the Syrian gridlock.

"Russia believes it would be impossible to restore the Assad regime's control over all of Syria by military means. Russia's military action is therefore geared to push for a negotiated settlement, albeit one on Russia's terms," Heller quoted Kozhanov as saying.

Speaking at the US Council on Foreign Relations, he said that "the Russians play a critical role in this," and that "there is going to be no way forward on a political front without active Russian cooperation, as well as true and genuine Russian interest in trying to find a political path."

True Reason for Kerry's Warning to Russia, Assad Over Syria Truce
Russia launched airstrikes against terrorist groups in Syria in September 2015 at the request of Syrian President Bashar Assad.

On March 14, Russian President Vladimir Putin ordered the withdrawal of most of Russia's military contingent from Syria after the objectives of the operation had been accomplished.

The Russia-US brokered ceasefire in Syria came into force on February 27. The terrorist groups Al-Nusra Front and Daesh, which are outlawed in Russia, are not part of the ceasefire deal.