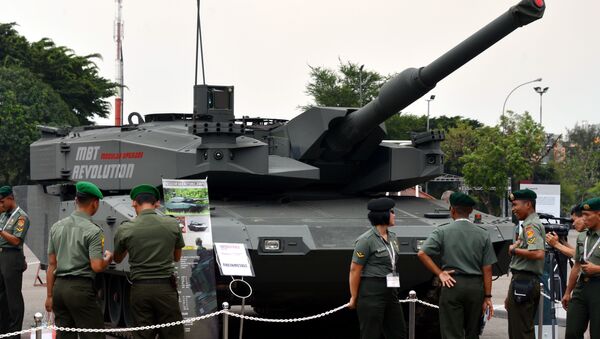 © AFP 2023 / BAY ISMOYO
Subscribe
International
India
Africa
The volume of arms exports from Germany in 2015 has almost doubled since 2014, reaching its highest level since 2000, local media reported Sunday, citing the Ministry of Economy.

Germany Records Lowest Small Arms Exports in Over 15 Years
MOSCOW (Sputnik) – According to Die Welt newspaper, which refers to the Ministry of Economy report, due to be presented to the government on July 6, the total amount of arms exports from Germany in 2015 stood about 8 billion euros ($9 billion), while in 2014 it amounted to about 4 billion euro ($4.5 billion).

The media noted that a number of factors contributed to the increase in sales volumes, including, for example, the permission to supply the United Kingdom with a tanker aircraft whose price exceeded 1 billion euro, as well as a deal with Qatar for the sale of tanks and self-propelled howitzers in the amount of 1.6 billion euro.

According to the publication, the level of arms exports from Germany to countries outside the European Union or North Atlantic Treaty Organization (NATO) remained on the same level as in 2015, that is, amounted to 59 percent of all deliveries. In 2014, it amounted to 60.5 percent.

In February, German Economy Minister Sigmar Gabriel said that the volume of German small arms exports in 2015 fell to the lowest level seen in the last 15 years.

However, in September 2015, Gabriel noted that German exports of small arms and ammunition to the Arab region increased by 32 times during first half of 2015, compared to the same period of 2014.