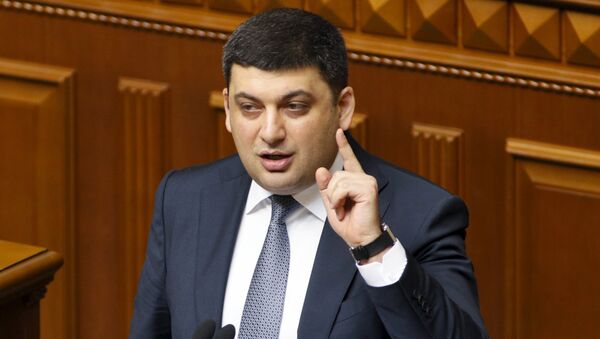 Steinmeier's Warning Against NATO Military Buildup 'Touched on Sore Place'
The Prime Minister said in an interview with German media that he doesn't think NATO is "saber rattling".

"Russia is the one doing that close to NATO borders" He told Funke media group, adding that "A door to NATO should stay open for Ukraine."

Groysman's position echoes German Finance Minister Wolfgang Schauble's infamous criticism of Berlin's policy towards Russia. According to Schauble, even the signals of de-escalating tensions should include elements of intimidation when it comes to dealing with Moscow.

Nonetheless, the militaristic views of Wolfgang Schauble remain out of vogue amongst Berlin's foreign policy establishment with the Western media interpreting Steinmeier's criticism of NATO policy to be a direct reflection of the opinions of German Chancellor Angela Merkel.

"Steinmeier is a cautious politician, and it is unlikely that he uttered those words without at least tacit support from Chancellor Angela Merkel. Which suggests that between the European members of NATO there is sharp disagreement about how to handle Russia" the Guardian wrote.

Although the body politic of Germany continues to be resistent to Schauber's virulent strand of Russophobia, the near recitation of the war hawk's position by Ukraine's Prime Minister signals growing trouble for Moscow's relations with Europe and raises the specter of increased NATO hostility in the months to come.

000000
Popular comments
I can see how, to such a small minded politician such as groysman, that the very fact of Russia being on the border, could be threatening. He is either showing his puppet strings or his overwhelming insecurity.
michael
3 July 2016, 01:51 GMT1
000000
Ukrainian MP's better change their narrative on 'Russian Aggression', other European nations have already moved into a vote to reducing sanctions on Russia. Looks like the Ukrainians have left themselves behind in this.