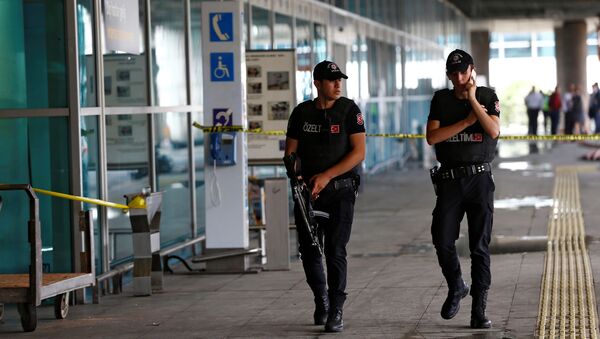 According to information obtained by Sputnik from sources in the Turkish security forces, Turkey is now seen by Daesh as an easy target for their attacks. 19 of the 44 victims of the recent terrorist attack in Istanbul were foreigners – a fact considered by many as a terrorist plan to target foreign nationals amid tightened security in Europe.

Turkish security experts believe that the decision to attack the Istanbul airport was made by Daesh leader Abu Bakr al-Baghdadi and that Osman Vadinov, a Chechen who joined Daesh two years ago, was ordered to organize the attack.

Two months ahead of the Istanbul attack Omar Vadinov reportedly crossed the Turkish border and visited the Kemal Ataturk airport several times to plan the attack.

Turkey Defies EU Over Anti-Terror Laws Following Istanbul Airport Attack
According to the news agency DHA, the terrorist attack on the airport that left 44 people dead and over 200 injured, was carried out by three suicide bombers from Uzbekistan, Chechnya (Russia) and Kirgizia. The terrorist from Dagestan reportedly arrived in Turkey about a month ago.

Sputnik has learned that after a series of operations by Turkish security forces, Daesh, which had earlier used Turkish nationals in its terror attacks in Ankara, Diyarbakir, Suruc and Gaziantep, started using foreigners who were either unknown to or were not being watched by Turkish intelligence.
Turkish police shadowed Daesh militants but did not interfere

In an interview with Radio Sputnik Mahmut Toğrul, a parliamentary deputy from the pro-Kurdish People’s Democratic Party, said that the Turkısh authorities were lagging behind in the fight against Daesh which now has a base in the country’s western Gaziantep province.

“We kept warning [the authorities] that their failure to secure the Djerablus-Aazaz line and sever the terrorists’ links to the outside world was fraught with big problems,” Mahmut Toğrul  said.

“According to official information, the Turkish security agencies have been watching Daesh terrorists’ every step since 2012 but have never interfered. They also listened to all of their communications, for example the Daesh commander overseeing the jihadists’ cross-border movements, but did nothing to prevent this happening”, he added.

Mahmut Toğrul accused Turkey of providing assistance to Daesh terrorists in their fight against Kurdish self-defense forces in Syria.

“Turkish police never tried to stand up to Daesh terrorists. Moreover, they helped them fight the Kurdish self-defense units. The Turks have since changed their tactic, but those who shadowed the terrorists but never interfered are also responsible for what happened in Istanbul,” Mahmut Toğrul said.

“Russia’s fight against Daesh is absolutely justified. The world must stand up the Daesh. Those who are turning a blind eye to the terrorists’ actions today will become their victims tomorrow. The international community can effectively fight Daesh only by helping the Syrian people and their armed forces,” Mahmut Toğrul said.

Daesh cells in Turkey could have been destroyed

Eren Erdem, an MP representing the opposition Republican People’s Party, said that the attack on Ataturk airport in Istanbul was the result of the Ankara’s “open doors” policy towards the jihadists.

“This policy poses a serious threat to our people. Our fraction proposed setting up a commission to look into the details of the terrorist act in Istanbul, but it was turned down by the ruling Justice and Development Party,” he said. “Turkey needs to join the fight against Daesh because if it does not we will have to pay a high price. Daesh is a threat to all Turkey.”

In September 2015, President Vladimir Putin said that terrorists from Russia and some other former Soviet republics going to fight in Syria posed a serious security threat to Russian citizens.

“Instead of waiting for them to come back, we need to destroy them before they do,” Putin emphasized.

Commenting on the Russian President’s words and on the Russian aerial campaign in Syria, Eren Erdem said: “Russia is bombing Daesh positions in Syria. This is a fight against barbarity and, therefore, is fully justified and necessary,” he said.

“Fighting terrorism is a global imperative, but this war should have its boundaries. Under the pretext of fighting terrorists the US is trying to redraw the regional map. This is an inadmissible policy, we should support the international coalition’s fight against terrorism, nothing more. We need Turkish airstrikes on Daesh positions in Syria and Turkish cross-border operations against terrorists. With the current normalization between Russia and Turkey, our concerted effort would help restore people in the region.”

“It is the duty of every modern country to fight jihadists and destroy their positions, because Daesh is a threat to the whole world,” Eren Erdem emphasized.