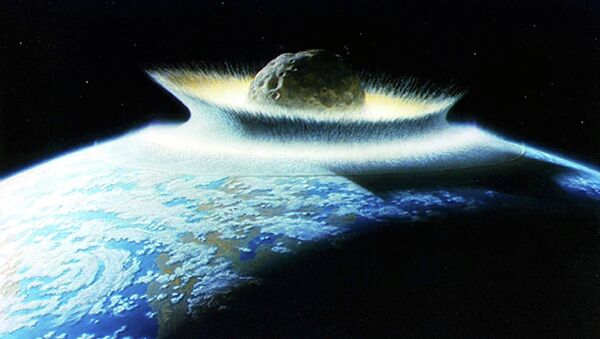 © Photo : Rex Features
Subscribe
It remains uncertain whether the giant ball of fire will insert itself in the race after learning it is only 2 points away from meeting the threshold to participate in the general election debates.

A shocking new poll indicates that 13% of American voters would prefer a giant meteor causing an apocalyptic firestorm over the planet over supporting either Donald Trump or Hillary Clinton for president. This means that a flying space rock is more likely reach the 15% threshold to participate in general election debates than Libertarian presidential candidate Gary Johnson and Green Party candidate Jill Stein.

That is according to a poll by left-leaning Public Policy Polling (PPP) which included the Giant Meteor option in its latest survey. 43% of respondents favored Hillary Clinton, 38% selected Donald Trump and 13% threw up their arms to welcome the Giant Meteor as the country’s new head of state. 7% of voters stated that they were undecided between Hillary, Trump, and an apocalyptic meteor.

The Giant Meteor enjoys support across the partisan spectrum securing a 23% favorability rating among liberal voters, a 21% positive rating among conservative voters, and viewed as a potential option by 16% of moderate voters indicating that the space rock’s support may grow in the coming months.

Men are much more likely to support the Giant Meteor than women indicating that many Donald Trump supporters would ditch the Republican nominee if only a speeding ball of fire would inject itself in the general election race.

The Giant Meteor seems to be absorbing support from the Bernie Sanders camp securing a whopping 27% of non-partisan voters, a group that disproportionately favored the progressive firebrand, compared to 31% for Trump and 35% for Clinton.

The Giant Meteor enjoys a broad base of support that extends well-beyond real-life third party candidates with Libertarian nominee Gary Johnson only securing 5% support and the Green Party’s Jill Stein securing only 2% of the electorate in a simulated match-up.

The survey of 853 registered voters was conducted via landlines and the internet from June 27-28 with a margin of error of 3.4%.