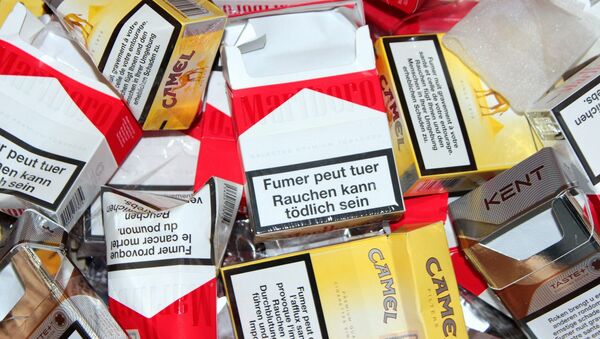 A group of Balkan journalists recently published an investigation called ‘Dossier Smoke', which refers to the smuggling of cigarettes through the port of the Montenegrin town of Bar to Libyan ports under control of forces close to al-Qaeda and Daesh.

Montenegro to Win From Brexit While Seeking Referendum on NATO Membership
According to the data collected by journalists Marko Vesovic, Vladimir Otasevic and Hasan Haydar Diyab, the smuggling activities regularly took place in 2013-2015. During this time, three and a half million kilograms of cigarettes were delivered to Libya from Montenegro, an amount which equals 140 million packs of cigarettes.

In an interview with Sputnik, Vesovic recalled that in 2001 the Croatian edition of Nacional magazine published data revealing connections between the "tobacco mafia" and the then President of Montenegro, Milo Djukanovic.

This network had beeing operating since the late 1990s. Now, the story seems to be repeating.

"The same Montenegrin elite are involved in a very complex system of organized crime, based on the smuggling of cigarettes to North Africa. In the 1990s they were smuggled to Italy, but then this route was closed because of pressure on the Montenegrin regime. Now, as we see, they found a new market," Vesovic told Sputnik.

According to the journalist, credible evidence from the scene shows that cigarettes delivered from the port of Bar "found their customers in areas of Libya" controlled by terrorists close to Daesh and Al-Qaeda.

"This indicates terrorism in the Middle East was also funded by such cigarettes ‘deliveries'," the journalist said.

According to the leader of the Montenegrin opposition party "Movement for Change" Nebojsa Medojevic, the smuggling activities "under the patronage of" the country's leadership is not a new practice. The illegal deliveries have been taking place since 1993, and even resulted in Djukanovic's conviction handed down by Italy's Supreme Court of Cassation in 2004.

Libya Accuses Detained Tanker's Crew of Diesel Fuel Smuggling
"The sentence, however, […] has not entered into force due to the pressure of international intelligence agencies, primarily American ones, which insisted that the case should be sent to archive," Medojevic said.

So far, the Montenegrin authorities have not reacted to the recent publication of the journalists which appeared several days ago. In Vesovic's opinion, the authorities might also try to deny the allegations saying that all the laws and customs procedures have been met.

"Formally, it is true, but the Montenegrin supervisors did not check how product loading was carried out and who the final recipient was. If they would have checked this, they would have revealed that the product goes to territory controlled by the Islamists," the journalist stated.

"The Customs Administration is aware of this all, but does nothing to prevent the obvious funding of terrorist and criminal groups. If the supreme prosecutor's office were truly independent, then someone would be held responsible for this. I am absolutely convinced that Prime Minister of Montenegro Milo Djukanovic is personally responsible for what's been happening," the journalist stated.

According to Vesovic, documents to which only the country's authorities have access could reveal other controversial details of illegal supplies.

"It is striking that not a single state has received even a similar volume of cigarettes from Montenegro, as Libya. Why Libya — we can only guess," the journalist said.

Total Black Out: Brussels Accused of Cover-up Over Tobacco Lobby Dealings
Another interesting revelation made by journalists is that the shipper was the company "Liberty Fze" from the UAE, which has been cooperating with the tobacco factory in Podgorica for many years.

Journalist Vladimir Otasevic told Sputnik that the next part of their publication will focus on the companies outside of Montenegro, which have used the port of Bar to deliver cigarettes to Benghazi, which until February was under the control of militants close to al-Qaeda.