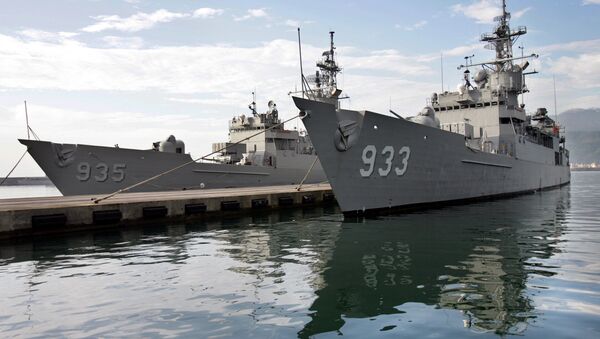 © AP Photo / WALLY SANTANA
Subscribe
This week, Beijing reiterated that it had no intention of recognizing Taiwan’s independence. On Friday, a Taiwanese warship ‘mistakenly’ launched a missile that inadvertently killed a fisherman.

"This missile was launched by operational error," said Vice-Admiral Mei Chia-hsu of the Taiwanese Navy, according to the South China Morning Post. "We are investigating the case."

The projectile in question was a Hsiung Feng III supersonic anti-ship missile. While it did not explode, the ship-to-air missile struck a fishing boat in the waters between Taiwan and China, killing a Taiwanese fisherman.

Taipei insists that the firing was not meant as a message to Beijing.

"That this is politically motivated, or this is to create crisis in the surrounding situation, this is not the case," Taiwan Defense Ministry spokesman Chen Chung-chi told reporters.

The timing of the incident, however, is hard to overlook. China is currently celebrating the 95th anniversary of the ruling Communist Party. While delivering a speech to mark the occasion, President Xi Jinping addressed Taiwan.

"More than 1.3 billion Chinese people and the whole Chinese nation will by no means tolerate secessionist activities by any person, at any time and in any form."

The exchange comes amid territorial disputes in the South China Sea. Beijing’s construction of artificial islands in the Spratly archipelago has sparked condemnation from the US and its Pacific allies. While Washington has accused Beijing of attempting to establish an air defense zone, China maintains it has every right to build within its own territory and that the islands will be used for primarily humanitarian purposes.

A highly contested waterway through which nearly $5 trillion in trade passes annually, most of the South China Sea is claimed by China, but there are overlapping claims by Brunei, the Philippines, Malaysia, Vietnam, and Taiwan.