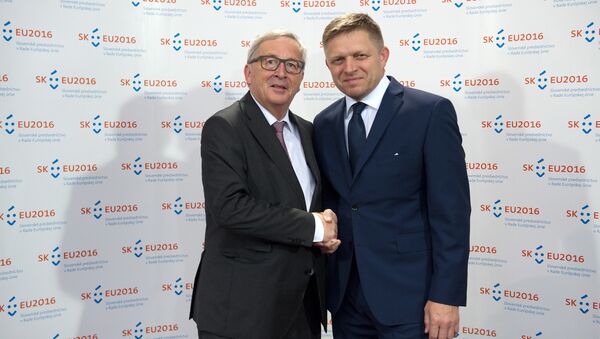 © AFP 2021 / Samuel Kubani
Subscribe
Slovakia takes over the rotating presidency of the European Council on July 1 - for the first time - promising an overhaul of the Brussels machine as it struggles to deal with the fallout of Brexit, the migrant crisis and the Eurozone troubles.

Slovakia's presidency comes at a critical time for the EU, with calls for massive reforms to prevent a domino effect, following the decision by Britain to leave the EU amid growing anti-EU sentiment throughout Europe.

As the Netherlands handed the presidency of the Council over to Slovakia, Slovak Prime Minister Robert Fico told journalists at a joint press conference with European Commission President Jean-Claude Juncker:

"The summit on Brexit due to be held in Bratislava on September 16 will be one of the top points of our presidency. At this informal meeting of state leaders we hope to hold a frank discussion on the further direction of European integration," Fico added.

Slovakia is no stranger to euroskepticism, being part of the Visegrad group — along with the Czech Republic, Hungary, Poland — which has been staunchly opposed to the mandatory relocation of refugees, as proposed by German Chancellor Angela Merkel and European Commission President Jean-Claude Juncker.

Slovak PM told reporters, as he took over the presidency:

"A vast majority of Europeans disagree with the current state of migration policy in Europe."

He described the Commission's proposal to fine member states US$278,000 for every refugee they refused to accept as "absolutely irrational."​

Fico's government is deeply protective of its borders and culture and the Visegrad group, along with Bulgaria and Macedonia, declared it would erect an "iron curtain" around its borders to prevent refugee flows.

He told Slovakian news agency TASR, in May:

"When I say something now, maybe it will seem strange, but I'm sorry, Islam has no place in Slovakia. I think it is the duty of politicians to talk about these things very clearly and openly. I do not wish there were tens of thousands of Muslims." 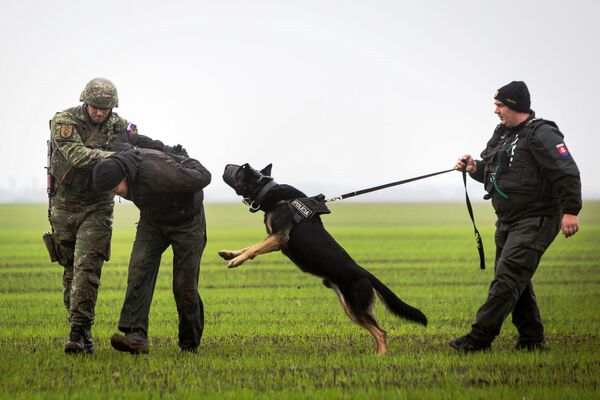 A Slovak soldier (L) and a Slovak policeman (R) with a dog detain a man playing the role of an "illegal migrant" during a joint exercise of Slovak police and Slovak Army.
© AFP 2021 / Vladimir Simicek

Slovakia's first task will be to deal with the fallout of Britain's decision to leave the EU — an act which will only be triggered when the UK invokes Article 50 of the Treaty Of Lisbon, which has not yet happened. In a sign of sympathy with growing euroskepticism throughout the EU, Fico promised a radical shakedown of the EU institutions.

"If you ask a Slovak citizen about the positives in the European agenda, he would find it very difficult to answer, and this is no longer tolerable. Citizens don't live in institutions, they live in member states," he told reporters.