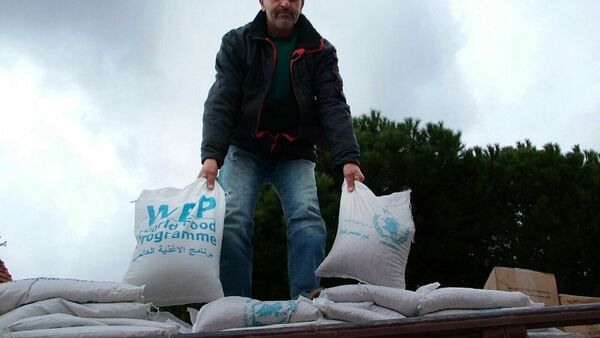 © Sputnik / Ali Abrahim
Subscribe
Russian servicemen delivered about 2.5 metric tons (around 2.8 US tons) of humanitarian aid to the Syrian province of Hama.

"The aid for Al Risafa residents contains primarily food products and presents for children for beginning of the school year. So that children can peacefully start their schooling. A total of 2.5 tons of humanitarian aid [was delivered]," Tokarev told journalists.

He added that local residents were given packages with individual rations: canned fish and meet, flour and groats. Along with presents for beginning of the school year children also got sweet treats.

Tokarev said Al Risafa residents accepted 150 refugee families in their village. He added that more than 100 people from Al Risafa were killed in clashes with terrorists and about 700 local residents are serving in the Syrian army – so, it is mostly women, children and refugees who are living in the village now. That is why Al Risafa needed humanitarian aid.

The Russia-US brokered ceasefire regime in Syria came into force on February 27. Al-Nusra Front and Daesh terrorist groups, outlawed in Russia, are excluded from the truce.