Sinking Ship? Erdogan Apologized to Russia to 'Save Himself' 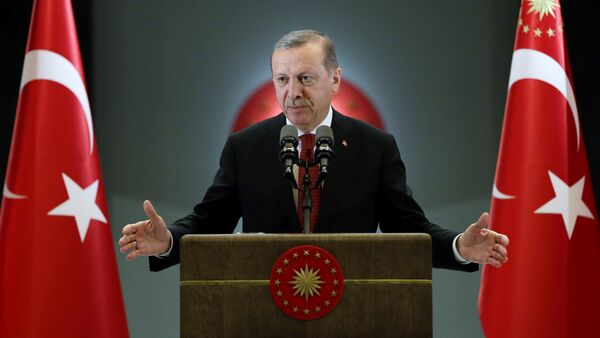 © REUTERS / Murat Cetinmuhurdar/Presidential Palace
Subscribe
International
India
Africa
After months of confrontation, Recep Tayiip Erdogan apologized to Russia for the shoot down of its jet operating over Syria and made a move to normalize relations with Israel. The editor of leftist Turkish newspaper “soL” Kemal Okuyan believes it was the only option for the Turkish president.

Turkey's Realpolitik: Ankara May Change Its Stance on Syrian Crisis
Speaking with Brian Becker of Loud&Clear, Okuyan, who’s on trial in Turkey for criticizing the president, said that Erdogan policies have led the country to political standoff with the US, Israel and the EU as well as Russia. Ankara has also traditionally had strained relations with Iran, Greece and Armenia that haven’t improved. As a result Turkey became “the country that has problems with all the world and regional powers.”

The Erdogan administration’s unsuccessful policies, along with its stance on Syria, split public opinion among the Turkish population, Okuyan says. Nearly half of the country’s citizens still support the president, while the other half oppose him.

“The Turks are fighting Erdogan, although they have supported him for a while,” he says, explaining that the more progressive part of society opposes Erdogan’s policies that combine nationalism and regionalism into what Okuyan describes as ‘Ottomanism.’

Erdogan’s new ‘Ottomanism’ philosophy fits in well with the intervention in Syria, Okuyan adds. While the president hoped to create an expanded region populated by Sunni Muslims to counterbalance a growing Iran, Ankara’s “policies in Syria have lost completely.”

Thaw in Ankara-Moscow Ties Might Improve Erdogan's Image
In addition, the downing of a Russian jet over Syria severed relations between Ankara and Moscow. As a result, Turkey experienced harsh economic consequences, particularly in the tourist sector. Without Russian tourists, some parts of the country are completely deserted.

“Erdogan was using Russia to balance some criticism coming from the United States. He tried to use the Russian card.”

Finding himself being criticized on all fronts, Erdogan extended a hand toward Russia in an attempt to save his political career. This does not mean, however, that all his problems with Russia are solved.

“This is the move Erdogan [made] to save himself. Of course it has some political and economic context, but the main issue is to save Erdogan.”