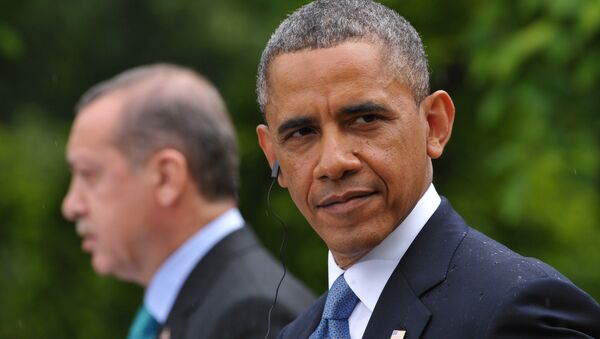 © AFP 2023 / Mandel NGAN
Subscribe
International
India
Africa
United States President Barack Obama thanked Turkish leader Recep Tayyip Erdogan for normalizing ties with Russia. Washington is not interested in a conflict between Ankara and Moscow. A thaw in Russian-Turkish relations allows the US to resume its policy in the region.

Russia to Take Steps in Restoring Relations With Turkey - Putin
After a Turkish jet shot down a Russian bomber in November tensions between Moscow and Ankara deepened.

At the same time, Washington and Ankara have been at odds over American support to Kurdish forces fighting Daesh militants in Syria and Iraq.
However, Russia and Turkey have returned to dialogue, and the US is also interested in this normalization.

"Now, we’re restoring ties between Russia and Turkey. This is not only a bilateral issue. This is a very important factor of regional and global stability," spokesperson of the Russian Foreign Ministry Maria Zakharova told Sputnik.

"From the very beginning, the US was in an uncomfortable situation. Tensions between Moscow and Ankara were surprising for Washington. This is why the US called for normalization," Nikolai Zlobin, head of the Washington-based Center on Global Interests, told the Russian online newspaper Vzglyad.

The conflict broke out at a time when the US was actively involved in Syria and was very interested in cooperation with Turkey.

Reasons and Prospects of Erdogan Extending Friendly Hand to Moscow
"When tensions between Russia and Turkey deepened the US was concerned that Moscow and Ankara would focus on the conflict, ignoring issues important for the Americans. Now Washington is satisfied with the normalization," he added.

In the context of the recent developments, the US understands that Turkey has a realistic view of the situation in the European Union. This may prompt Ankara to cooperate with Washington.

"The US considered the conflict between Russia and Turkey as loss of control over the regional agenda. Now, the situation is getting better for Washington," Zlobin said.

The US stance on the Russian-Turkish conflict is ambivalent, Gevorg Mirzayan, research fellow at the Institute for US and Canadian Studies, the Russian Academy of Sciences, said.

"On the one hand, the Americans are not interested in stabilization between Russia and Turkey because it makes Erdogan more independent. On the other hand, they are not also interested in a conflict. If Turkey sent troops to Syria and clashed with Russian forces the US would have to decide whether to support Erdogan or not. Anyway, the US doesn’t want military confrontation with Russia," he said.

US DoS Not Commenting on Reported Partnership Proposal With Russia in Syria
Earlier, The Washington Post reported that the US has offered Russia a deal to increase military cooperation on airstrikes against terrorists in Syria.

The deal backed by US Secretary of State John Kerry has been personally approved by President Barack Obama, the article added, noting that the US has in return requested Russia to pressure the Syrian government to stop carrying out strikes against groups not considered terrorist by Washington.

Zlobin noted that the US did not play the key role in Erdogan’s decision to start dialogue with Moscow.

"The US condemned Turkey for the downing of the Russian jet. Europe also criticized Turkey. Erdogan received this political message," he said.

However, the analyst underscored that Erdogan acted in his own political interests, not being pressured by other players.

"Erdogan is a strong politician acting in his own interests. Now, he’s interested in normalizing ties with Russia. And Moscow is interested too. Both parties are using the situation. The US did everything to make this situation possible," he said.