The Real Reason Behind US 'Provocative' Asian Drills 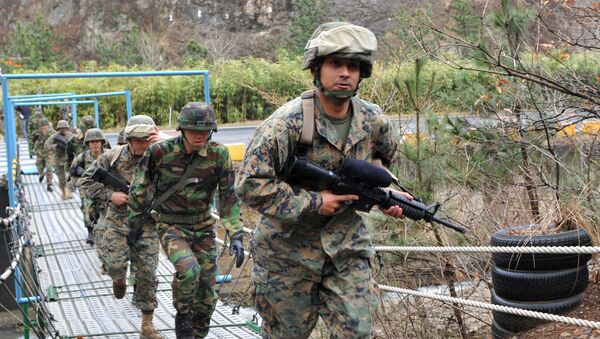 Japan, South Korea and the United States held an unparalleled trilateral missile defense exercise on Tuesday, aimed at countering North Korea, which denounced it as a “military provocation.”

Kim Jong Un: Pyongyang Can Strike US Pacific Bases With Ballistic Missiles
The trilateral exercise included a ballistic target tracking operation to test the Aegis anti-missile systems used by the US and its two key Asian allies.

“While there were no missiles fired, all participants’ strengthened interoperability, communication channels, data collection and capabilities assessments,” the US Pacific Command said in a statement.

On June 22 North Korea tested a medium-range Musudan missile which was seen by some weapons experts as a significant step toward an operational intercontinental ballistic missile by 2020.

Kim Jong-un spoke about the possibilities attacking US targets in the Pacific Ocean, as theoretically North Korean missiles can reach the island of Guam, which is a US outpost in that part of the world.

Therefore, according to the official version, the recent trilateral exercises were held in connection with the missile and nuclear tests by Pyongyang.

However, according to the head of Korean studies at the Institute of Economics, the Russian Academy of Sciences, Georgiy Toloray, “Conducting these exercises is a fairly quick response of the US to the missile and nuclear ambitions of North Korea.”

He further said that according to his recent discussions with Americans on the sidelines in Washington and San Francisco, they do not seriously believe that North Korea is able to proactively strike nuclear missile attack on the United States.

“But for Washington it's a great excuse to place anti-missile systems in South Korea and cobble together a trilateral US-Japan-Korea military unit. And, of course, to a large extent, this is anti-Chinese,” Toloray said.

According to the analyst this is because the US relations with China from the stage of partnership and competition are increasingly moving to the stage of confrontation.

North Korea plays just a “trigger role” for these US actions, the analyst said.

“It should be noted that even if North Korea sat quietly and did not do anything, Washington would have found some other excuse. Of course, the North Koreans are behaving provocatively, but this is not the real reason for the growing tensions in Northeast Asia,” Toloray said.

North Korea called these drills provocative saying that it would continue to “take countermeasures” until and unless the US stops putting pressure on North Korea by means of “nuclear threats and sanctions.”

The Wall Street Journal said deepening such cooperation between the US, Japan and South Korea is “vital for defending America and its partners against North Korea’s nuclear capabilities, and for putting China and Russia on notice that the US won’t be muscled out of Asia.”

The drills were also perceived as aimed at sending a message by the Japan Time newspaper. “Tuesday’s drill also delivered a message of intent to China as Washington and Beijing continues to jostle for influence in Asia. Pentagon chief Ash Carter said last week the Musudan test underlines the need to strengthen missile defenses to protect US troops stationed in South Korea and Japan.”

Despite US claims to protect its troops, the US militarization in the region is quite obvious. On Monday the guided missile destroyers Spruance, Momsen and Decatur from the US Third Fleet’s Pacific Action Surface Group (PAC SAG) took part in the Oceania Maritime Security Initiative (OMSI) in the South China Sea to ensure stability and strengthen coordination with partner nations, the US Navy said in a press release.

The latest OMSI exercises took place amidst disputes over territorial and maritime claims China has made in the South China Sea.

Tensions have increased in anticipation of a ruling by an arbitrations panel created under the jurisdiction of the UN Convention on the Law of the Sea to resolve competing claims by the Philippines and China.