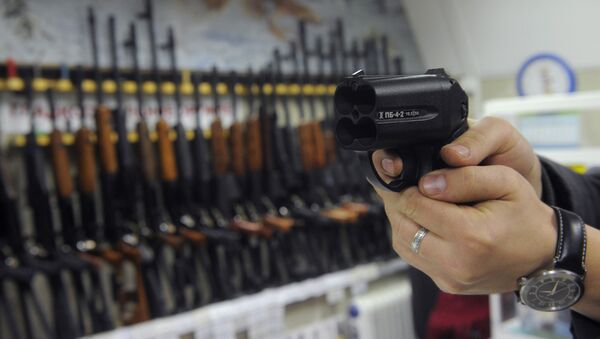 © Sputnik / Grigoriy Sisoev
/
Go to the mediabank
Subscribe
International
India
Africa
A new poll released on Thursday has revealed that support for stricter gun control has reached the highest level of support that it has ever had before.

The survey, conducted by Quinnipiac University, found that in the wake of a massive uptick in mass shootings and gun violence, 54% of voters are in favor of tighter regulations — while 42% are opposed.

The numbers are heavily divided by gender, however, with women supporting tougher regulations 63% to 33% — while 51% of men oppose more gun control and 45% in support.

Unsurprisingly, among those who live in households with at least one gun, the support for gun control dropped drastically to only 39% in favor of stricter laws, while 56% oppose them.

The survey did find however, that 86% of Americans are in agreement that those on FBI watch lists should not be allowed to purchase the weapons, despite the constitutional issues involved with the removal of someone’s rights without due process. Only 12% of Americans were opposed to the concept.

Over 90% of Americans also support background checks on all gun purchases, with only 6% in opposition. Interestingly, despite the near universal support, 35% of those polled believe that expanding background checks would not help to curb gun violence.

Democratic members of Congress are expected to continue their fight for stronger gun control after they return from the Fourth of July holiday.