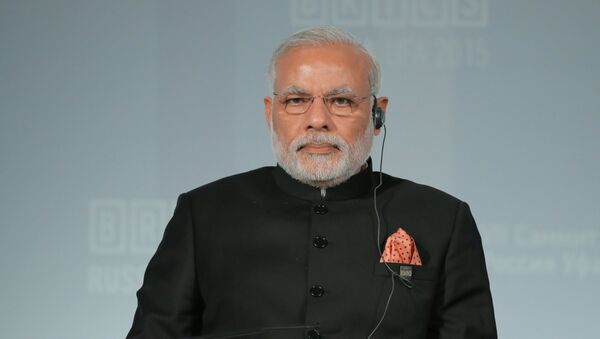 © Photo : Host photo agency
/
Go to the photo bank
Subscribe
A meeting on the BRICS Parliamentary Consultative Committee on India’s Chairmanship was held in Delhi.

Indian Foreign Minister Sushma Swaraj on Thursday chaired the BRICS Parliamentary Consultative Committee on India’s Chairmanship. It is an important precursor meeting for the BRICS Summit scheduled to be held in Goa in October this year.

BRICS Bank 'Very Likely' to Issue Bonds in Russian Ruble Before End of 2016
India assumed the rotating chairmanship of BRICS from Russia on February 15 and will hold the position till December 31, 2016.

BRICS countries together comprise 42 percent of the world’s population and their combined economic output exceeds $16 trillion. India will host the BRICS summit for the second time, earlier it was held in Delhi in March, 2012.

The forthcoming BRICS summit will focus on building responsive, inclusive and collective solutions for the group.

India Expects Putin to Attend BRICS Summit in Goa in October – Ambassador
India will emphasize institution-building and implementation of commitments made at previous summits. It will also try to explore synergies among the various existing and established framework mechanism of BRICS.

BRICS as a grouping has been pushing for greater economic growth among its member countries and reform of global financial institutions.