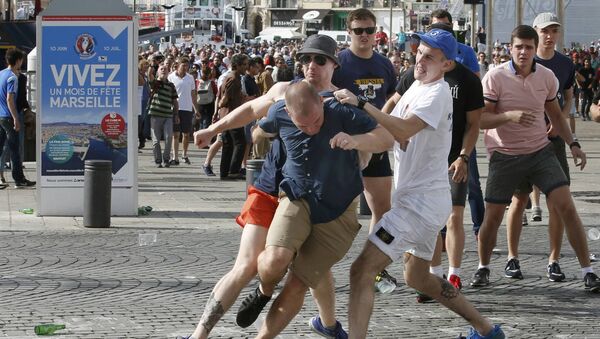 © REUTERS / Jean-Paul Pelissier
Subscribe
Sergei Gorbachev is one of the three Russian football fans imprisoned in France after the violent clashes with England fans in Marseille earlier this month. In an interview with Radio Sputnik Sergei’s lawyer, Alain Duflot, spoke about his client.

Russian Parliament to Consider Bill on Identification of Football Fans Soon
“No one is questioning the veracity of the televised reports where  England fans are fighting with Russian supporters and locals, but you need to arrest those who deserve to be arrested. Several people were detained on the spot, but there were no Russians among them. My client was arrested more than 100 kilometers away from Marseille in a bus two days after that game,” Alain Duflot said.

“My client, just like many others, had found himself trapped, driven by locals into a narrow lane and unable to get out. <…> He couldn’t have attacked anyone. He was actually trying to defend against a crowd of stone-throwing youngsters. He was even trying to help those lying on the ground. I guess police arrested the Russians just to make sure that the English and local fans were not the only ones involved in that violence,” Duflot said, adding that only a handful of rioters had been punished so severely.

He described the French authorities’ decision to deny the detained Russians their right to have their case handled by a Russian court as politically motivated.

“If they had tried local young scallywags the way they did the Russians there would have been riots. If they had sentenced the English fans, that would have caused a diplomatic row.”

“French police took a whole two days to respond, then they ran down the list of names, watched the video accounts and arrested the Russians they saw in those videos. This whole thing smacks of a political witch hunt,” Alain Duflot noted.

An appeals court in Aix now has four months to either uphold the sentence handed down by the court in Marseilles, or throw it out.

“I think that the judges in Aix will be less biased, that’s why I’m optimistic about the outcome of our appeal because this is a clear case of self-defense. I’m expecting a fair trial and not a politically motivated one. Gorbachev is no hooligan,” Alain Duflot said in conclusion.

On June 11, the Russian national football team faced off with England at the Velodrome stadium in Marseille in a qualifier played as part of Euro 2016.

After the match, dozens of Russian and English fans scuffled at the stadium. Two Russian supporters were later detained by police.