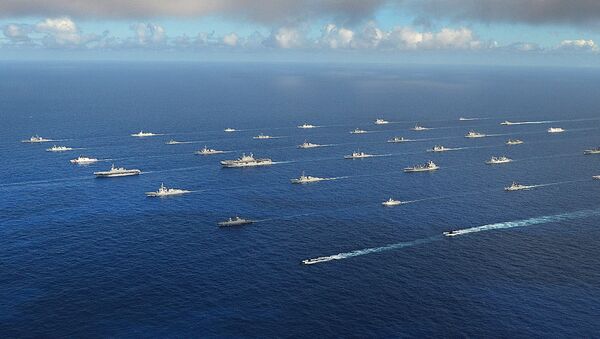 RIMPAC, which involves 27 nations, 45 battleships, 250 aircraft, and a total of 25,000 troops, can be understood as “shadowboxing” in the Pacific. The war games highlight the growing contradictions between Beijing and Washington, Mercouris tells Loud & Clear’s Brian Becker.

“On the one hand, the US and China are becoming increasingly confrontational towards each other in the South China Sea and elsewhere. On the other, they don’t want to be defined at this time clearly as adversaries,” Mercouris says.

Is Washington Ready to Recognize China as Another 'Great Power'?
The participation of the two powers in the military drills is clearly a compromise, the analyst said, pointing to the fact that many in the American establishment see China as an adversary of the US. Senator John McCain, for instance, would prefer that US-led be openly hostile toward China. The hawkish politician has been consistent in his anti-China views throughout his career, Mercouris says.

China, for its part, has no interest in making the United States an enemy. Since the 1970s, Beijing has adopted a policy of “acquiescence or even appeasement” to the US and indicated it would not challenge US hegemony.

Beijing is focused on economic development more than geopolitics.

“China is becoming an increasingly powerful country. It does not yet have the kind of global reach that the US does. So the Chinese have repeatedly shown that they are prepared to work within the US-led system.”

The problem for Washington is that China’s huge economy could one day exceed that of the US.This has led to the conflict in the South China Sea, where the US has pushed Beijing into a military standoff.

“It is the US that is involving itself in the conflict within the South China Sea. It the US which is trying to make lines between the Pacific powers, and they are clearly directed against China, though nobody says that,” Mercouris says. “It’s the US that is pivoting to Asia in order to contain China. And of course it’s the US that is talking up the threat to China.”

Olive Branch: Washington Not Excluding China From US-led World Order
However, it’s questionable if turning China into an enemy will help the US sustain its dominant position. Given that it’s “very hard to see how China is actually destabilizing the Pacific in any meaningful way,” Americans should reconsider their approach toward Asia.

“If outsiders like the US stay out of it, all these countries, which have a very long history of relations with China, would eventually come to some sort of a deal with China. If the US involves itself in the quarrel it will make the quarrel worse and prolong it.”