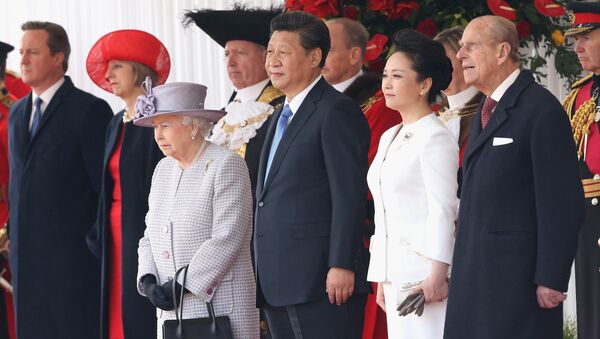 The Brexit vote has created the conditions for a further Sino-British rapprochement, prompting experts to speculate about the possibility of establishing China-UK free trade.

London is bolstering Sino-British ties: the UK is interested in Chinese investments, especially in the wake of the historical Brexit vote.

"Britain will launch high-level trade missions to China, India, the US and the Commonwealth as it gears up for its split from the EU, discussions in Number 10 [the Prime Minister's Office] have concluded," Financial Times reported Thursday.

The media outlet quoted David Cameron who urged the UK's business leaders to make advances beyond the EU and not to be "fixated" on the bloc.

China-Russia Ties to Only ‘Deepen’ Amid Chaotic International Situation
Remarkably, in October 2015 ahead of Chinese President Xi Jinping's arrival in the UK, George Osborne, Chancellor of the Exchequer, claimed that Britain should become "China's best partner in the West."

For its part, China has also demonstrated its readiness to work with London, Sarkis Tsaturyan, a Russian-Armenian historian and international policy analyst, noted in his recent op-ed for Regnum.

"I do recommend seizing the opportunity to establish China-UK free trade to enhance bilateral cooperation between the two countries," Lu Zhengwei said, as quoted by the Associated Press.

The Sino-British rapprochement is hardly surprising.

So far, it is no coincidence that China Minsheng Bank has opened its European office in London, not in Frankfurt am Main — a global hub for commerce and the most important financial center of the European continent.

"Britian's calculations are clear," the analyst explained, "they are seeking Chinese investments into Northern Powerhouse project aimed at linking Manchester, Liverpool, Leeds, Sheffield and Newcastle through a network of high speed railways."

Oops! Washington's Aggressive Posture Pushes Russia & China Closer Together
Thirdly, Brexit will allow Beijing to establish direct ties with The City and to exert a pressure on Brussels-based Eurocrats. For its part, London wants to strengthen its positions in Europe, redistributing Chinese investments throughout the European bloc. In exchange, the UK leadership is lobbying the internationalization of the gold-backed yuan.

Zhang Lihua, director of the Center for China Europe Relations at Tsinghua University in Beijing, recently stressed that "one of the benefits China can gain from 'Brexit' is a stronger and closer economic relationship with the UK and even with the EU," as cited by the Associated Press.

China views a lucrative European market as an alternative to that of the US. Indeed, although Beijing invested almost $15 billion in the American economy back in 2015, its overall investment in 28 countries of the European bloc amounted to $23 billion, not to mention ChemChina's purchase of the Swiss Syngenta company for $62 billion last year.

Philippe Le Corre of the Brookings Institution shares a similar sentiment, stressing that China's focus has recently shifted to Europe and to new fields such as hospitality, real estate, energy, transportation, and heavy industry. The scholar notes in his recent book "China's Offensive in Europe" that Chinese investment is due to grow throughout Europe in the years to come.

Nothing Special: UK’s Economy Likely Unaffected by Brexit in Long-Term
Needless to say, Washington is fuming over China's recent developments in the UK and in Europe in general: Beijing's initiatives may upset the Transatlantic Trade and Investment Partnership project championed by the US financial establishment.

Washington's concerns are not groundless: Beijing's New Silk Road and the Asian Infrastructure Investment Bank initiatives have received high praise from Western European major states as well as the periphery, Keith Johnson of Foreign Policy magazine noted, stressing that China's ambitions for Europe are "as much about geopolitics as commerce."

Despite China's recent charm offensive in the West, Russia's role as a secure transit route and indispensable supplier of energy resources to China is of ultimate importance for Beijing.

To bolster the New Silk Road initiative, Russian President Putin is pushing ahead with the project of integration between the EAEU and the Silk Road Economic Belt. Furthermore, as Russian Foreign Minister Lavrov pointed out in his speech at the State Duma on June 15, "Vladimir Putin on the start of consultations between the member states of the EAEU, the SCO [Shanghai Cooperation Organization] and ASEAN [Association of Southeast Asian Nations] on forming a comprehensive Eurasian economic partnership in the future."

These railways running through Russia are the "major nerve" of modern geopolitics, the analyst underscored.